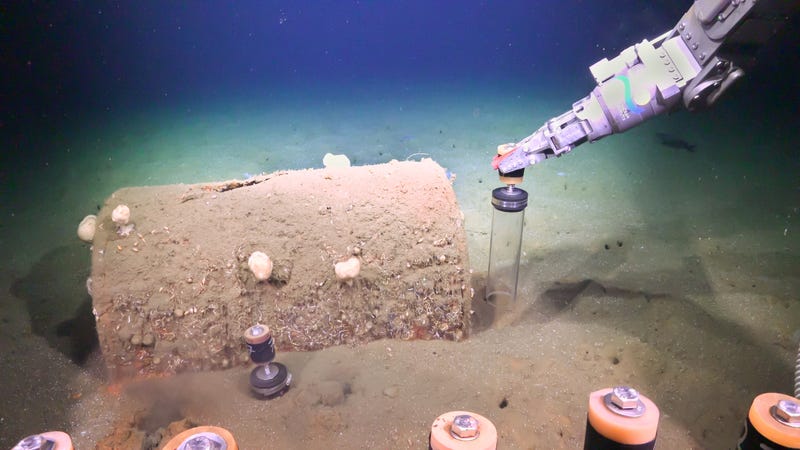 Researchers use Remotely Operated Vehicle SuBastian to collect sediment push cores and record video footage, data that will be used to add to the assessment on how this stretch of deep-sea is responding to DDT. The science team is conducting research on the DDT Dumpsite off the coast of Los Angeles where barrels of chemicals were dumped from 1947-1982. Photo credit Schmidt Ocean Institute
By KNX 1070 Newsradio

After a 12-day expedition off the coast of Southern California, Marine scientists with the Scripps Institution of Oceanography are sharing their findings - which include several DDT dump sites.

DDT (or Dichlorodiphenyltrichloroethane) a compound that was used as an insecticide prior to 1972, was banned in many countries due to the health risks associated with human and animal exposure to the chemical.

“We certainly saw a lot of barrels down there,” Scripps Oceanography Researcher Dr. Lisa Levin said of the dumping ground off the coast of San Pedro. “Some of them were in different states of degradation.”

The DDT dumping ground examined by the team of scientists with the Scripps and Schmidt Ocean Institutes is believed to contain hundreds of thousands of barrels of toxic waste from the production of the chemical.

With an underwater robot, researchers aboard the Falkor research vessel took samples from six barrels to understand the ecological effects of the dump sites and determine the levels of DDT present in the ecosystem after more than 50 years.

Marine scientists with Scripps & @SchmidtOcean have completed a 12-day expedition in which they explored the mineral-rich seafloor and several DDT dump sites off Southern California. Along the way, they discovered a whale fall & a methane seep! Read more: https://t.co/NB0ojdyQ30 pic.twitter.com/GnUtidypN5

Researcher Paul Jensen said the team doesn't have the funds to study the DDT site samples in depth, but hopes their findings will open up larger research into the area and the harmful effects of chemical compounds.

In addition to their findings at the DDT site, scientists on the 5,310 square mile expedition collected more than 300 samples of seafloor rocks, sediment, seawater and marine invertebrates.

In collecting samples, researchers also hope to evaluate the therapeutic and drug discovery potential of deep-sea microbes found in mineral-rich areas, according to a release from the expedition team. 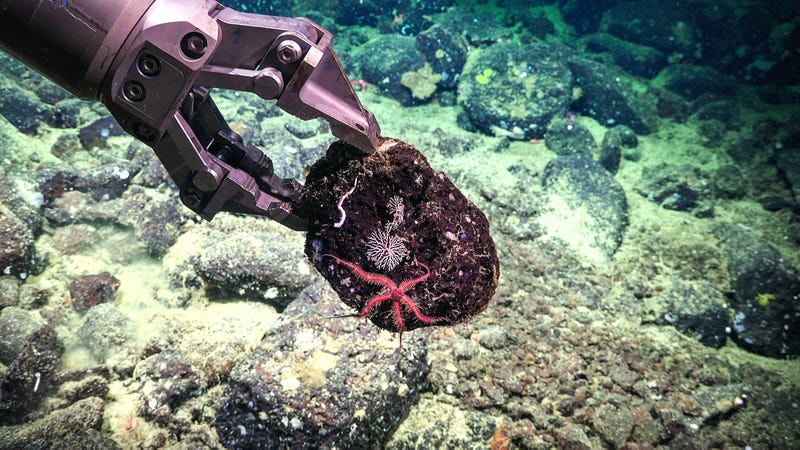 A brittle star and coral are picked up by ROV Subastian’s manipulator arm, along with the piece of deep-sea rock they are inhabiting. Taking the rock along with the accompanying organisms allows the scientists to study whether certain organisms prefer certain substrates. Photo credit Schmidt Ocean Institute

“Establishing ecological baselines in the deep sea allows us to track changes over time and better understand the consequences of human actions,”Dr. Levin said. “The DDT dump site provides evidence of a large human footprint in the deep ocean, but we are just starting to identify the effects on local marine communities.”

All 12 of the team’s expedition dives were broadcast live to the public. You can watch below: