LOS ANGELES (KNX) — The number of Russian and Ukrainian people arriving at the United States-Mexico border is increasing, as people from both countries seek to enter the U.S. as the invasion of Ukraine continues. 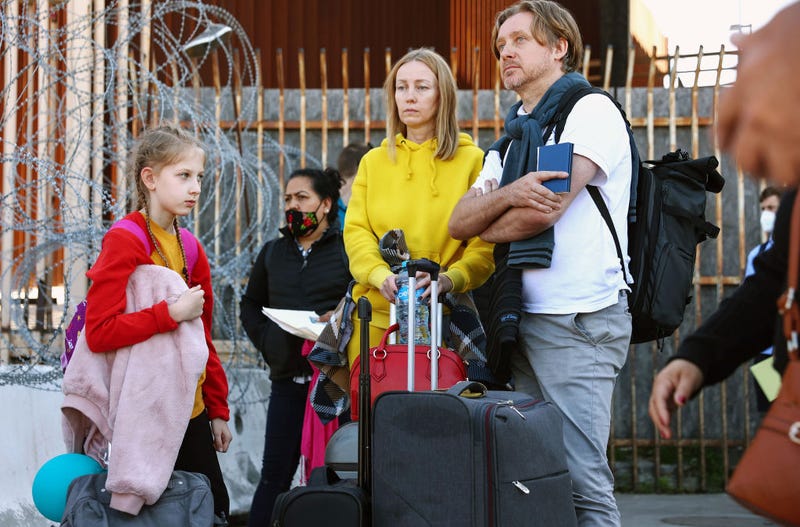 A Ukrainian family who fled Kyiv, Ukraine waits with their luggage before being allowed to cross the San Ysidro Port of Entry into the United States to seek asylum on March 22, 2022 in Tijuana, Mexico. U.S. authorities have recently been allowing Ukrainian refugees to enter the U.S. at the Southern border in Tijuana with permission to remain in the U.S. on humanitarian parole for one year. Photo credit Mario Tama/Getty Images

Bolter explained that the fiscal year is October through February and said, so far, March data is not available. However, she said, those numbers are where we’d be able to see the effects of the Russian invasion of Ukraine.

Early into the pandemic, Title 42 was put in place to prevent asylum seekers from bringing COVID-19 into the U.S., and gave border patrol agents the right to “immediately expel migrants without providing them access to asylum” Bolter said.

However, that order seems not to be put into effect when it comes to many from Ukraine who are arriving at the U.S.-Mexico border — whether it's "fair" or not.

“We’ve seen in recent weeks that border patrol has started to put in place an exception — largely for Ukrainians — and has been allowing them access to the asylum system when they show up at ports of entry along the border,” she said. “Even though they’re still not allowing access to asylum for people who are coming from most other countries.”

Bolter said “humanitarian exceptions” are made on a case-by-case basis and she believes that “theoretically,” Russians who fear returning to Russia because they don’t believe in what President Vladimir Putin is doing, or maybe have spoken out against the war, should also be let through as the crisis continues.

“I think that the fact that Russians who are fleeing persecution for objecting to the same concept that the Ukrainians are fleeing…and they still can't ask for asylum…really makes the [randomness] of this policy in place at the border crystal clear,” she said.

“But at the same time there are plenty of Central Americans, Nicaraguans, Venezuelans...who are fleeing persecution who also haven’t been able to enter at these ports of entry since March 2020.”

Mexico would only require passport and flight information to enter the country, but the U.S. wants proof that the person intends to eventually leave.

“It has become much harder for anyone from these countries to get any kind of tourist visas or any non-permanent visa because in order to get a tourist visa they essentially have to prove that they intend to go back to their home country…and that’s very difficult for Ukrainians to do at this point,” Bolter said.

“So in the absence of pathways to come into the U.S. Many nave turned to Mexico instead.” 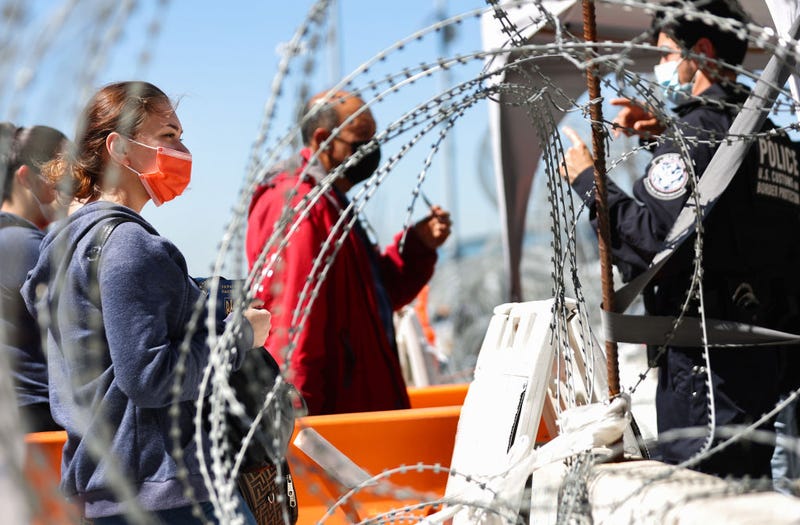 A person from Ukraine (L) holds their passport while waiting near a U.S. Customs and Border Protection officer before being allowed to cross the San Ysidro Port of Entry into the United States to seek asylum on March 22, 2022 in Tijuana, Mexico. U.S. authorities have recently been allowing Ukrainian refugees to enter the U.S. at the Southern border in Tijuana with permission to remain in the U.S. on humanitarian parole for one year. Photo credit Mario Tama, Getty Images