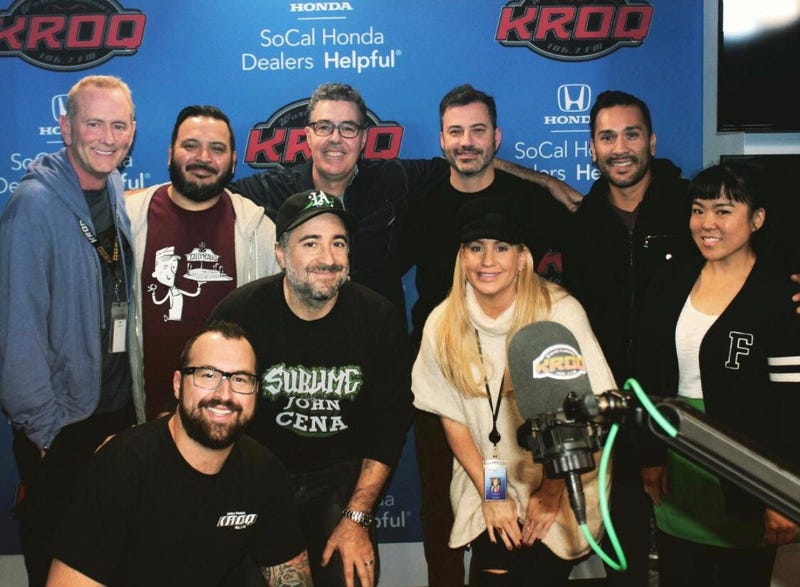 After nearly 30 years on The Kevin & Bean Show, Gene "Bean" Baxter signed off from his final show on KROQ this morning with the help of in-studio guests and former morning show alumni Adam Carolla and Jimmy Kimmel. The show was filled with memories and stories from the last 30 years, plus surprise calls from some very special guests.

One of the big surprises of the morning was an unexpected call from Jim "Poorman" Trenton, a former KROQ on-air host and co-creator of "Loveline". Much of the surprise came from the fact that Poorman and Bean have a complicated history - Poorman was let go from his position on KROQ after orchestrating a prank in which he brought hundreds of listeners to Bean's house in the middle of the night. The incident resulted in chaos and forced Bean to move out of that home. Watch the interview below to see the contentious discussion about what went down all those years ago.

Then, on the other line, Dave Grohl of the Foo Fighters called in to give his best wishes. Grohl, a frequent guest on Kevin & Bean and KROQ, wanted to congratulate Bean and profess his longtime love of the show. "You feel like friends," Grohl said as he thanked Bean, "You're gonna be missed my friend." Watch the guys chat with Dave below.

Next, they heard from another former member of the Kevin & Bean show: Ralph Garman, a longtime fixture on the morning show, called in to share some of his favorite memories of working with Bean. They reminisced about one of Ralph's first appearances on the show, an April Fools prank in which he voiced Radiohead lead singer Thom Yorke getting in an argument with and punching Bean. They also played a clip from a bit that Bean declared "the single greatest moment of the Kevin & Bean Show", which included Ralph, as Jerry Lewis, speaking to the then-President of France Jacques Chirac.

As the show began to approach its close, and after spending over two hours in the studio, it was time for Adam and Jimmy to say their goodbyes too. They both got emotional as they voiced their love and appreciation to both Kevin and Bean for giving them their starts on KROQ.

Jimmy was the first to get misty-eyed as he said, "I just want to thank you guys. I love you guys." Adam joked a bit before saying sincerely, "You know, when somebody dies, you go 'they still live in your heart and they still live in your mind'. Bean has always been that way while he's on the Earth and while he's alive. We all have that invisible connection with Bean."

Watch the touching tributes play out below.

Other friends of the show that took the time to call in and say some kind words included Matt "Money" Smith, Ryan Seacrest, Big Tad, Lightning, and Dr. Drew. There were also calls from longtime listeners who wanted to celebrate Bean's impact on their lives, including a listener whose missing brother was found after Kevin & Bean shared his story on the air and a listener who attributes Kevin & Bean to helping him survive his battles with depression. Hear the heartfelt stories from a couple of wonderful Kevin & Bean listeners below.

You can hear the full audio of Bean's final Kevin & Bean Show below. The morning show will continue Mondays through Fridays from 5am to 10am on KROQ with Kevin Ryder, Allie Mac Kay, and Jensen Karp.