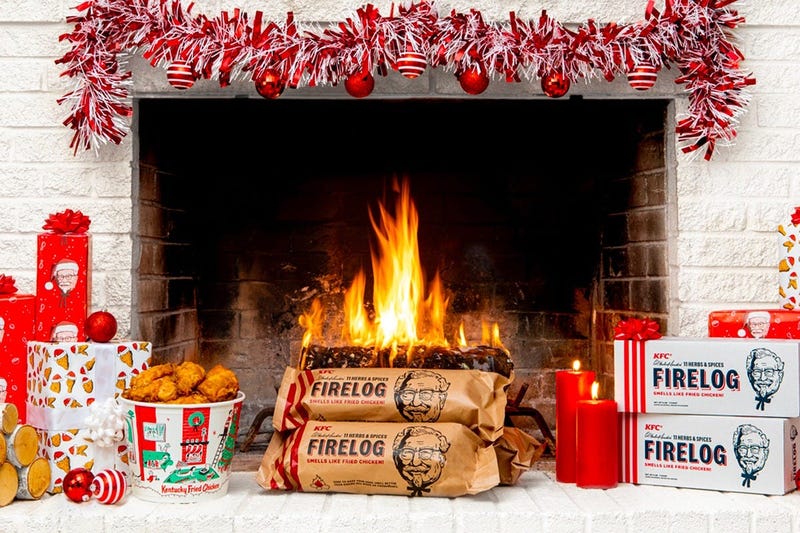 The Fast Food industry and Quick Service Restaurants are always evolving with companies and their kitchens constantly trying new things and testing recipes. They are looking to find new customers and bring them into their restaurants and hopefully earn new customers. Jensen describes these new items to us and we decide if we would try them, or not.

Allie was gagging when Kevin was ready to eat it. Nah, so Beat It!

Kevin was in even before Jensen could begin describing it to us, so Eat It!

Beer Mug says Nah! In a very rare move, Mugs would take separate bites of hot dogs and pizza, but he will not combine them, so Beat It!

In a partnership with Enviro-Log and Wal-Mart, KFC is bringing back its 11 Herbs & Spices Firelogs. They released it last year and it sold out in 3 hours, and yes it will make your house smell like the colonel’s fried chicken. They are made with 100% recycled materials and promises 2-3 hours of smell. You can find them at Walmart.com for $18.99, so it’s time to turn up the heat. Fried chicken fireplace yes, or I’d rather smell some burning flesh. Heat It or Beat It? Here’s our take:

Since Beer Mug can’t eat the log, he wants nothing to do with it, so Beat It!

Kevin will heat warm up his house with it because he loves that chicken smell, so Heat It!

Allie would like to smell that, so Heat It!

Next, we have a first for the Fast Food Report. Jensen is happy to report that Red Lobster has made it into the Fast Food Report with their latest edition to the bar, the Lobster Claw Bloody Mary. The Lobster Claw bloody Mary mixes Tito's hand-made vodka, Red Lobster’s bloody Mary mix rimmed with a spicy Chipotle BBQ seasoning. It’s topped with an entire chilled Maine Lobster claw, a jumbo shrimp, and a signature cheddar baked biscuit on top of the bloody Mary. It is garnished with a lime wedge and green olive. It is limited to participating locations nationwide through February 2nd. Bring on the bloody it sounds rad, or I’d rather infest my pubes with crabs. Drink It or Sink It? Here’s our take:

Kevin is Sinking it, bigtime!

Beer Mug gives credit to Red Lobster for this concoction because he wants it, so Drink It!

Allie loves all the amazing seafood in it so much, that she will take Kevin’s and drink 2 of them, so Drink It!

Christmas may have passed, but Japan is still celebrating with the Starbucks Santa Boots Chocolate Frappuccino. This festive drink is made with a rich base of chocolatey sauce and chocolate chips and topped with a crispy salted potato chip and finished with an edible cookie straw creating a holiday Frap. that even the Grinch could handle. These will obviously only be around in Japan for another week or two. So, Jensen asks, Oh yeah let those Santa Boots lick or I’d rather let Casey Anthony babysit my kids? Drink It or Sink It?

Allie will Drink It.

Kevin was in at the word chocolate and didn’t even let Jensen finish describing it, so Drink It!

Beer Mug is flying out to Japan tomorrow specifically for this, so Drink It!

Arby’s has taken everything that people love about brunch and turned it into a sandwich. The Bacon Ham & Egg brunch sandwich. It features ham, a freshly cracked egg, cinnamon sugar bacon, a potato cake, and French toast inspired sauce. It’s a test sandwich spotted only in Ohio so far and the best part is, it’s served all day. Perfect for an early day snack or I’d rather lick a weight lifters acne riddled back? Eat It or Beat It?

Kevin could eat that all day long, so Eat It!

After Beer Mug’s flight to Japan, he’s jumping on another flight and heading to Ohio to eat this, so Eat It! 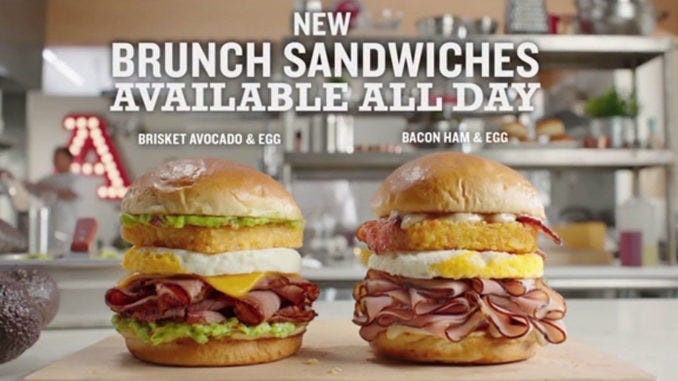 music
The Reel Buzz: 'Spiral' and 15 other movies to watch this weekend
news
Still haven't filed your taxes? Avoid late fees with an extension
sports
The 2 worst hitting teams in MLB history, as expected, struggled in first game of series
<a href="http://www.audacy.com/articles/abc-music-news/lady-gaga-justin-bieber-bts-to-appear-in-hbo-maxs-friends-the-reunion?article=curated" class="trending__item__link spa-link" data-track-type="article-link" data-track-compo