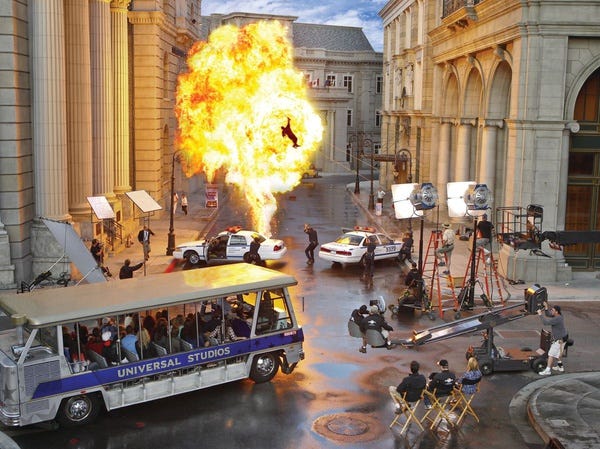 Theme-park goers spend nearly ten times more to visit Universal Studios Hollywood than they do at Disneyland when considering each park’s amusements, a new study revealed.

Researchers from the European Travel Information and Authorisation System (ETIAS) examined the 65 most popular theme parks globally and ranked them according to best and worst value.

Universal Studios Hollywood ranked as the most expensive theme park for cost per ride in the entire world, estimated to cost around $12.91 per ride. The second most costly park — Disney’s Hollywood Studios in Florida — is less than half that cost. The list of priciest parks also included both SeaWorld locations, Universal Studios Florida, and Six Flags Magic Mountain.

A representative for the Universal theme park said the study was unmerited.

Disneyland Park ranked as the most affordable theme park in California, charging visitors under $1.40 per ride, the survey estimated. Knott’s Berry Farm (around $2.20) and Disney California Adventure ($4.25) ran slightly higher. Six Flags Magic Mountain ($4.25) and SeaWorld San Diego (around $6) rounded out at the bottom of the list.

Researchers used parks’ daily ticket cost to calculate the amount per ride, factoring in the average wait times to predict how many rides the average person could enjoy in one visit. However, they did not account for time spent walking to rides around the parks.

With only ten rides in the park, Universal offers the least amount of rides, accounting for the higher cost per attraction. Disneyland in Anaheim has more than 50. Magic Mountain has around 20.

“Our theme park is defined by our incomparable, award-winning rides and attractions and the overall exceptional experience we strive to deliver to our guests over the past 50+ years,” Universal’s representative elaborated. “This sentiment is continuously reinforced by our guests who visit us from around the world.”