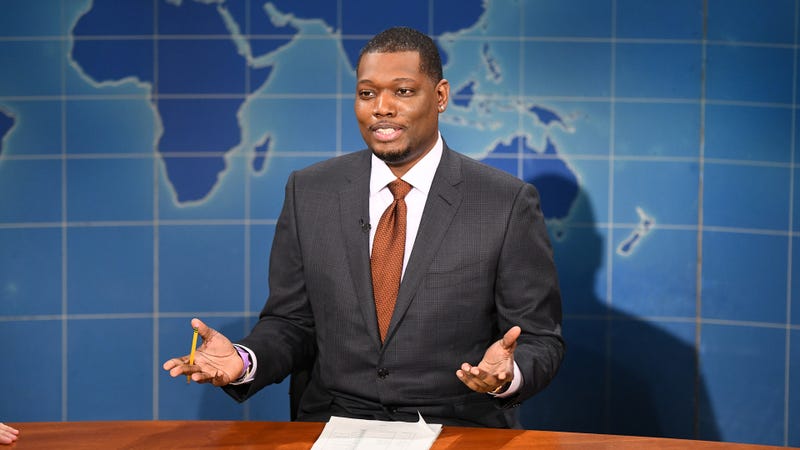 On the latest episode of the WTF with Marc Maron podcast, comedian Michael Che joins host Marc Maron for a discussion about his time with Saturday Night Live, fine art, hosting award shows, and more -- including the return of his HBO Max sketch show, That Damn Michael Che.

While getting into some Saturday Night Live shop talk and their memories of the gritty Big Apple -- notably Katz' Deli, "the only thing left," they both agree, of old New York -- Manhattan-born and raised comedian Michael Che spoke of how he got into comedy and some of the unlikely trades he plied while coming into his own.

Che says he tried "a little bit of everything," before landing in comedy at the age of 26. As a teen, he attended the iconic Fame school (Fiorello H. LaGuardia High School of Music & Art and Performing Arts); "I knew I wanted to be an artist somehow, but I didn't know what it was," he admits. "Anything from painting, to acting, to directing, to something. I just wanted to be in not-cubicle world."

His first step into creativity was putting paint to canvas. "I was doing Fine Art," says Che. "I would have stuck with it if I was good... I tried. I liked it, but I knew it was not my first language. I knew I knew how to do it because I knew how to do something else... but it wasn't my first sport. I knew comedy and performing was probably gonna be the thing, but I was just afraid to do it."

Odd jobs and keeping friends entertained in the cafeteria weren't going to get him where he wanted to be. Che says eventually he "nutted up" after being fired from a job and began going to small clubs to study the craft. "I'm watching 'Tough Crowd,' I'm watching 'Jerry Seinfeld: Comedian,'" says Che, while also hearing his favorite comics all over national radio shows. "It humanized it," he says. "It made me feel like, 'oh, this is something you can work at and get good at.' You don't have to be Eddie Murphy immediately. Almost nobody is!"

Listen to the full WTF with Marc Maron episode featuring Michael Che, now playing on Audacy -- and follow along for more revealing conversations with your favorite comedians, actors, directors, writers, authors, musicians, and folks from all walks of life.

While you're in the mood, browse and favorite some of Audacy's all-new stations like Conscious Hip Hop, Hip Hop Uncut, Beach Beats, 80s Guitar, Collabornation, Rockternative, Drivin' Alt, Wake Up and Rock, and The Roots of Rock for those who crave the early days.