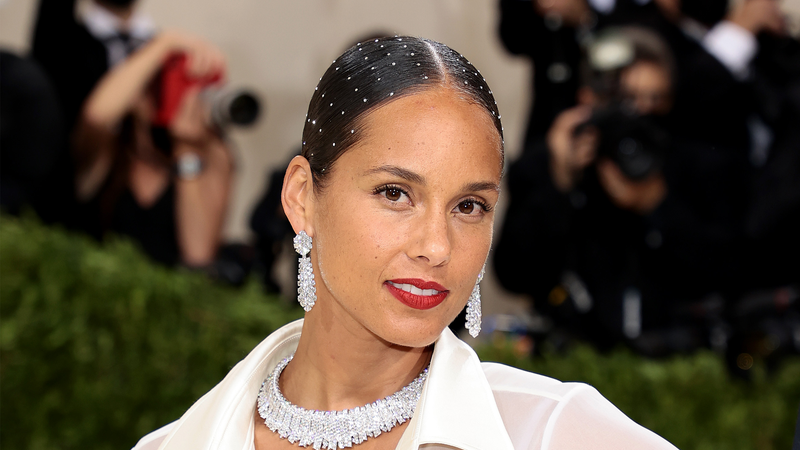 To celebrate her 41st birthday, Alicia Keys posted pics of on Instagram rocking a seriously sexy birthday suit. Not the kind you're imagining, but still it seriously slays.

Anyway, in the three pic series, Keys looks absolutely stunning — serving in a shimmering, skintight bodysuit, glittery sheer tights, which she paired with white knee-high boots and a matching blazer.

Captioned, "Birthday loading… ⌚️👀🎉🍾🎈✨✨✨✨✨✨✨✨✨✨✨," the GRAMMY winner was seen clutching a bouquet of balloons, as her smile grew with each pic that followed.

But that wasn’t the only way she celebrated the occasion, lol not that we ever thought it would be. While last year was the big 4-0, this year Keys still did it up big, thanks to her producer husband. In honor of his wife’s 41st trip around the sun, Swizz Beatz whisked his wife and a group of close friends on a surprise trip.

By the looks of Swizzy’s IG feed, the party got started before they even arrived at the mystery destination. Revealing that Keys was unaware of where they were headed , saying "she don’t know where she going".

And even continued on the party bus once they had landed.

And while the location is still a mystery to us, Keys clearly had herself the time of her life (see proof below).