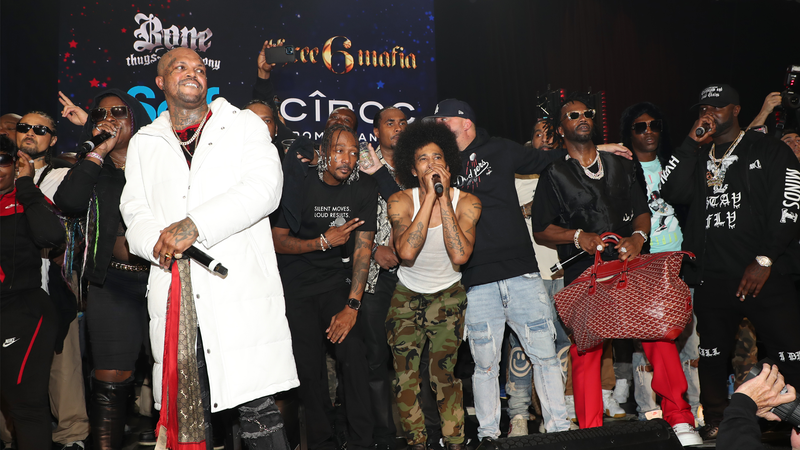 The Bone Thugs-n-Harmony and Three 6 Mafia VERZUZ battle went down on Thursday December 2 in front of a live audience, and for the first time ever, there was actually a fight.

Things got started got off to a pretty standard start, however, five rounds into the match-up Bone Thugs’ Bizzy Bone had a message for Three 6 Mafia, particularly Crunchy Black for “mocking” him during his groups performance.

“Aye, yo… Aye, before we even get started, you ugly motherf*****s ain’t finna be mocking me while I’m on motherf***in’ stage. Like straight the f*** up,” Bizzy said, and things just escalated from there.

Then Juicy J decided to add a little spice by simultaneously yelling “Suck my d***!” (twice). Clearly irritated, Bizzy chucked a bottle in his direction.

Which led Gangsta Boo (Three 6 Mafia) to snap and yell — “Bizzy Bone, you a hater! You must not have taken your pills! What the f*** wrong with you b**** a** n****!?”. That’s when everyone started fighting and Bone Thugs’ longtime manager and friend Steve Lobel had to step in.

Watch it all go down below —

Following the scuffle, the livestream was paused and a sign appeared that read “Due to technical difficulties this event will return monetarily”. After a few minutes the battle broadcast resumed, and Bizzy returned to apologize and help the night continue on a positive note.

Obviously Twitter did what it do, recapped the evening with hilarious reactions. Check out some we found particularly amusing below.

So that's why they had the caution tape. #Verzuz pic.twitter.com/zWXQ4cuF89