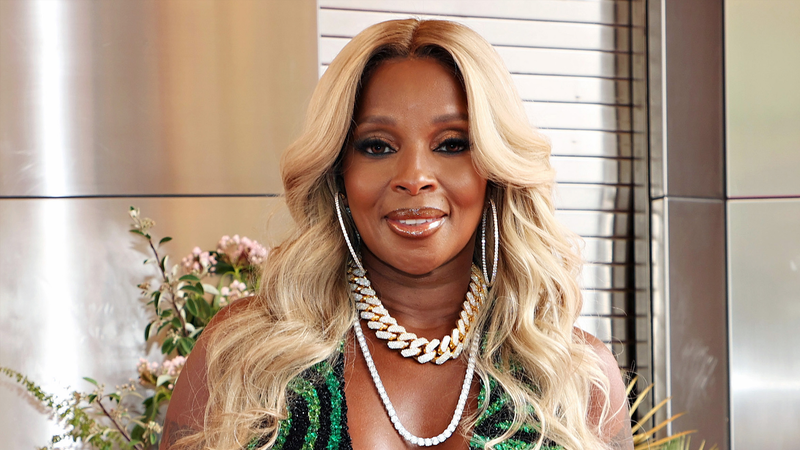 Currently gearing for the upcoming release of her brand new Amazon Studios documentary My Life, Mary J. Blige stopped by The Kenny Burns Show to speak with Audacy and V-103’s Kenny Burns about what to expect from the doc that got it’s title of course from Blige’s 1994 landmark sophomore album of the same name.

Focusing on more than just the music, the doc, premiering on June 25, will amply focus on her successes as well as her “trials, tribulations and journey,” to becoming who she is today.

As Mary explained, the documentary is “coming from a triumphant place, but you also have to go through the tragedies and the tribulations, to show people where the pain came from and why it healed so many people.” Which if you’ve ever heard a Mary J. Blige song, then you know exactly just how true that is. And if you haven’t - what is wrong with you?

Blige’s relatability is just one of the many reasons she’s had such success. And having gone through various ups and downs throughout her life and career, she is now choosing to share her experiences in a way she hasn’t before.

With her usual outlet being music, in this documentary, Mary J. goes “through the celebrations," and painful interviews discussing her childhood and teenage years in a way that evokes emotion the same way her lyrics do.

Choosing not to go into detail about things she considers to be “not a lot of people’s business,” Mary noted she did address and elaborate on “the things that people know,” despite how painful it was “going back.”

Blige went on to share that she wasn’t going to be the only one addressing the past, mentioning that “testimonies from the fans,” her family, as well “the producers on the album… and Puff,” would be featured as well. Puff of course - as in Puff Daddy, who now goes by Diddy, Mary revealed, “even goes deep into his relationship and his trauma.”

“We go there,” Mary stated, implying to not shying away from the hard stuff. “You know Andre’s in it. It’s dedicated to Andre, the whole documentary. We had to go there, but it’s special, because we’re here to tell the story now.”

Andre Harrell, who passed away last year, was an music executive and producer that helped catapult the career of many, including both Diddy and Mary. Throughout her career Mary has expressed viewing Andre as a father figure in the industry, always making sure that she stayed on the right path even when things would get tough.

Telling Burns who had a personal relationship with Harrell as well, “He was really my father, when it comes to this music business, he really cared about me. He gave me so much information for a lot of the things I’m doing right now. Andre inspired me and helped me to do a lot this stuff, so to see him in the documentary is a little sad because he’s not with us anymore. But from day one… I was like this man is special and he must really care about music,” acknowledging that upon first meeting there was no way he had those feeling towards her, meaning it had to be about the music first, adding, “and that’s why I love Andre.”

Nearing the end of the interview Kenny asked Mary if she had anything to share with those getting ready to watch the doc - which she did, saying “I hope you enjoy the journey, because it was something,” and that despite having gone through so much pain, she is coming out on the other side. Which “just shows people you could do it too, if you’re hurting… just hang in there… because you never know what’s on the other side.”

For all that and more watch the full interview with Mary J. Blige above and check out the My Life trailer below.