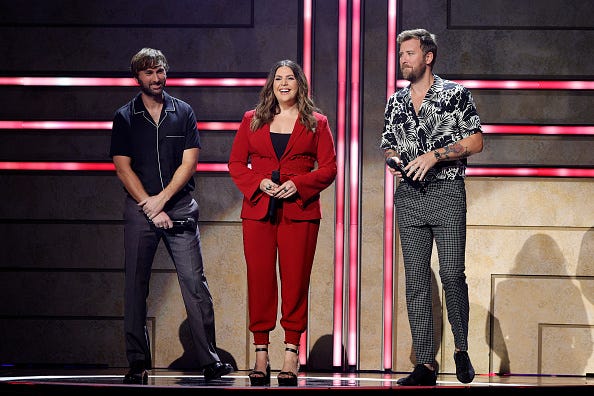 Halloween is a big deal in the houses of the individual members of Lady A, who have six kids between the three of them; Hillary Scott has three daughters: Eisele, 8 and twins Emory & Betsy, 3, while Dave Haywood's son Cash is 7 and his daughter Lillie is 3, and Charles Kelley's son Ward is 5. And the kids are all set to go Trick or Treating this weekend....mostly.

Charles Kelley's son Ward picked out what the family would be for Halloween. “He’s gonna be Velociraptor Blue, explains Charles. "He’s really into dinosaurs, so he’s this Jurassic Park character. And I’m Owen the trainer (played by Chris Pratt in the movie). And Cassie is Claire, the park manager (Bryce Dallas Howard’s character). So, we have our family costumes. They’re ready.”

Meanwhile, Dave Haywood is also set to take his kids Trick or Treating. “I’m joining in with my three-year-old, Lillie," he shares. "She’s gonna be Belle and I’m gonna be The Beast. So, I’ve got my costume, my little Disney Beast costume, and she’s got her Belle dress and jewelry ready to go, and we’re excited about it. My son wants to do like a Minecraft thing. I know a lot of his buddies are playing it too, but he’s doin’ a Minecraft sort of costume.”

And if you haven't figured out your kids' costumes yet, Hillary Scott feels ya. “So, I am gonna be a total transparent mom and say that we don’t know yet," she admits. "And it’s getting so close to Halloween but we don’t know. It might be homemade costumes this year. We’ll just have to see.”