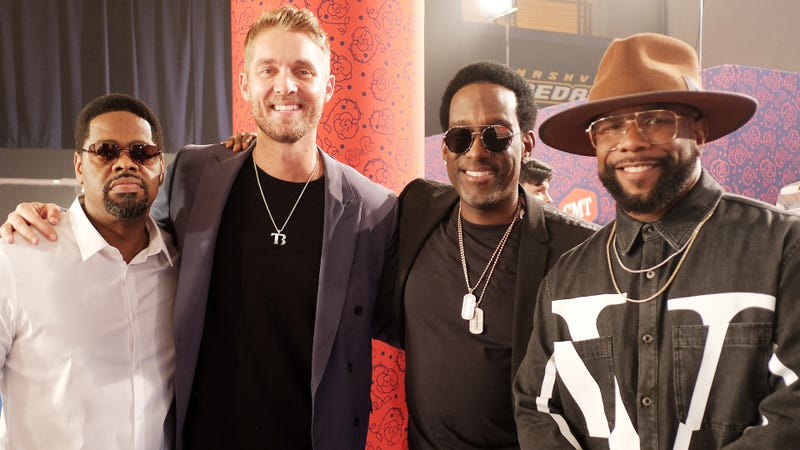 Ever since he tagged along with his big sister to a Boyz II Men concert when he was younger, Brett Young has remained a big fan of the group which prompted the ultimate bromance.

Listen to Brett on the Superstar Power Hour with Katie Neal, plus a chat with Jordan Davis

“My first concert ever was Boyz II Men and Montell Jordan,” Brett told Audacy’s Katie Neal. “ I was really young, I went with my sister and I fell in love with their singing…. At the time, I couldn’t believe four people could sing that incredibly and that perfectly, together. That made me want to sing.”

That inspiration turned into stardom for Brett, who now has numerous hit Country songs to his name. His status as a modern-day Country star has allowed him to get to know the group he has looked up to so much personally.

Their friendship really came in handy when it came time to review Brett’s new single, “You Didn’t.”

“When we wrote this, we wanted to write like a Boyz II Men type song,” Brett shared of the creative process for the new single with co-writers Jon Nite, Jimmy Robbins and Ashley Gorley. “We had written two songs already and were about to be done for the night and we just like geeked out on Boyz II Men during dinner and decided to write another one.”

After feeling like they nailed the Boyz II Men aesthetic, Brett and company Facetimed his idols to make sure he got it right.

“We felt like we nailed it. To the point where we were like Facetiming the guys from Boyz II Men to play the song for ‘em. We were just so excited about it!”

Turns out everyone was excited as Brett shared lead singer Wanyá even joined him for a recording of the song as a duet, unfortunately it didn’t make the record.

“You Didn’t” is available now and the first taste of new music to come from Brett who is readying the release of a new collection of songs.