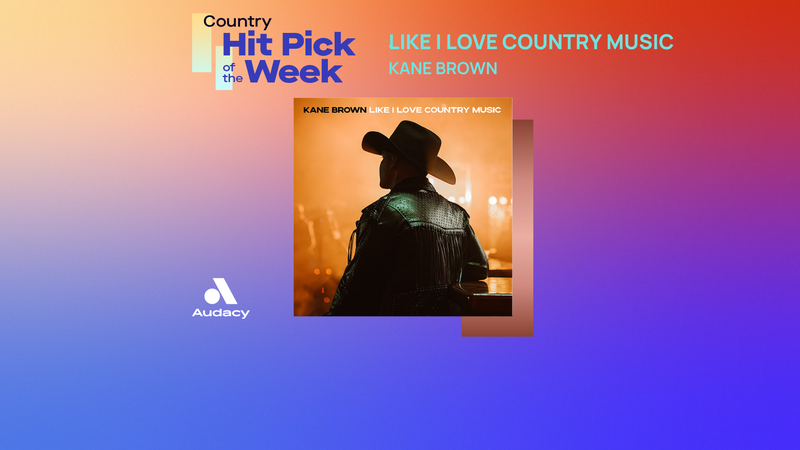 Our Audacy Country "Hit Pick of the Week" is Kane Brown’s "Like I Love Country Music."

Kane Brown is giving fans a full serving of his Georgia roots with a side if 90s Country in his new single, “Like I Love Country Music.” While the song isn’t new to Kane and many of his fans since he’s often played it during live sets, he is excited to release it as an official song and part of his forthcoming album.

“I’ve had this song since… 2019,” Kane told Audacy’s Katie Neal, admitting the song didn’t have as big of a grasp on him back when he wrote it. “I went back recently on this last tour and was listening to the demo and it just hit a lot different.”

He continued, “It was cool to notice how fast people caught on to the chorus,” he said of fan’s reactions during his live sets. “It’s pretty simple and pretty catchy and and now that I’ve mentioned I’m putting it out people have been like, ‘finally! I’ve been waiting years for this!’”

Not only are fans ecstatic to have access to the song any time they want, but they’re also excited to hear some Country’s most iconic voices from the ‘90s, Brooks & Dunn, on the song.

“I was honestly shocked they were jumping on it,” he said of Brooks and Dunn lending their vocals for a line of the track. “It’s crazy how impactful it is talking about somebody’s song, and then they’re on it!”

Mentioned earlier, the song is part of Kane’s forthcoming album which is set to be released some time this year. “It’s definitely coming this year,” Kane said of the new project. “I don’t know what month, but I am excited. I think it’s going to be the best album I’ve ever released and I hope everybody loves it as much as I do.”

Listen for Kane's brand new single, “Like I Love Country Music” all week on your favorite Audacy Country Stations.