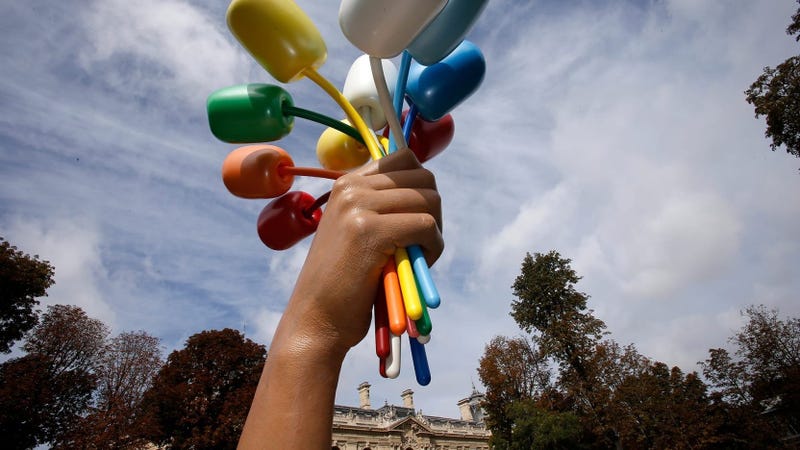 By Jack Guy, CNN
(CNN) -- A new sculpture by American artist Jeff Koons, unveiled last week to honor the victims of the 2015 Paris terror attacks, is dividing opinions in the French capital.

Koons gifted the "Bouquet of Tulips" to the city at a ceremony on Friday. The 41 feet tall sculpture has been installed in a garden next to the Champs-Elysées.

Koons said the sculpture was a way of showing solidarity with the victims and their families and reflected on his own post-9/11 experiences in the US.

"I did, as a citizen in New York experience 9/11 and the depression that hung over the city," he said, according to Reuters.

"It really took years for the city to be able to come to life again."

Some critics -- both in the art world and on social media -- were less than enthused by Koons' tribute to the victims, which consists of a hand holding a multicolored bouquet of tulips made of bronze, steel and aluminum. The flowers are generally perceived as a symbol of love.

In an excoriating assessment, he called the artwork a "pornographic sculpture" that is part of an "irresponsible massacre of the urban landscape in Paris."

Reactions on Twitter have been mixed as well. Eric Naulleau, a French TV presenter and literary critic, defined the work as "despicable"

One Twitter user, Rosa Rosam, claimed that young Parisians would now believe that tulips were "big colored marshmallows," and another, Gilles Brandet, called the artist's work "eye-candy for philistines." More criticism came from Danièle Pain, who took a cue from Michaud's piece and went as far as calling the work a "homage to hemorrhoids."

Paris mayor Anne Hidalgo, however, said she was happy to unveil the sculpture, which she called "a beautiful gift" in a tweet.

Others called the work "very pretty" or said they were "delighted" by the tulips.

Koons will donate 80% of the proceeds of the copyright of the work to the families of the victims of the 2015 attacks.

The sculpture was initially scheduled to be installed in 2017 and at a different location, in front of the Palais de Tokyo museum, but the pavement there was deemed not sturdy enough to sustain the heavy artwork, which weighs 34 tons. That choice of location also attracted criticism from a group of French artists and politicians, who published an open letter in the newspaper Libération in early 2018, asking for the gift to be taken back and suggesting that the initiative amounted to publicity and product placement.

In May, 64-year-old Koons' "Rabbit" sculpture became the most expensive work by a living artist ever to sell at auction.

The stainless steel figure, which measures just over 3 feet tall, sold for more than $91 million at a Christie's sale in New York.