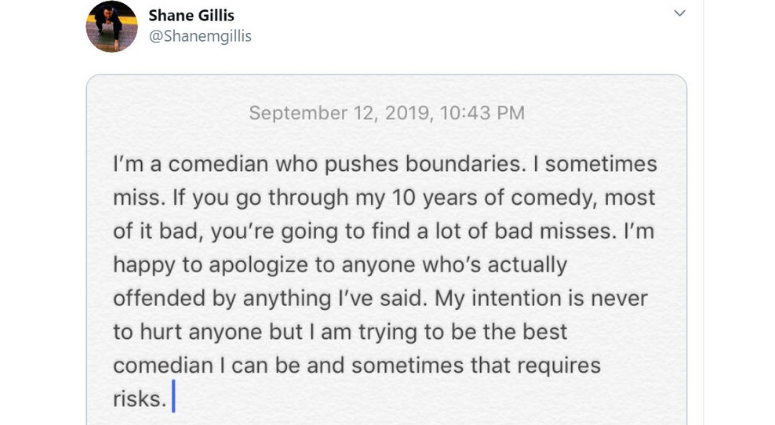 By Whitney Friedlander
(CNN) — New "Saturday Night Live" cast member Shane Gillis, a Mechanicsburg native, has issued a statement in response to criticism over racially insensitive comments he made as part of his podcast.

According to footage resurfaced by journalist Seth Simons, the comedian is heard using a racial slur against people of Chinese descent in a September 2018 episode of his show with Matt McCusker, "Matt and Shane's Secret Podcast."

"Chinatown's f---ing nuts" he says at one point in the conversation, which has since been deleted, followed by "let the f----ing ch--ks live there."

In another episode first highlighted by Vulture, Gillis and McCusker rank the talent of other comedians based on ethnicity and gender and used a homophobic slur. When discussing the approach of comics like Judd Apatow and Chris Gethard, they described them as "white f**got comics."

Thursday night, just hours after it was announced that Gillis was joining "SNL" next season, he posted a statement on Twitter.

"I'm a comedian who pushes boundaries. I sometimes miss. If you go through my 10 years of comedy, most of it bad, you're going to find a lot of bad misses," Gillis wrote. "I'm happy to apologize to anyone who's actually offended by anything I've said. My intention is never to hurt anyone but I am trying to be the best comedian I can be and sometimes that requires risks."

Gillis is among three new "SNL" cast members set to join the sketch show. He joins Chloe Fineman and Bowen Yang. Yang, who is a child of Chinese immigrants, is the show's only Asian American series regular.

"SNL" did not respond to an emailed request for comment by CNN.

The response online was swift and strong. CNN Opinion writer Jeff Yang tweeted that " if you want to know what being a person of color is like, it's literally that for every Bowen Yang-shaped step you take forward, you also take one racist-ass Shane Gillis-shaped step back."

Gillis is just the latest example of a comedian's past comments gaining new attention in the online world. Trevor Noah saw a backlash to some of his old tweets, which were deemed offensive toward women and Jews, when it was announced he'd be replacing Jon Stewart on Comedy Central's "The Daily Show." Kevin Hart stepped down from hosting this year's Oscars after his past homophobic tweets surfaced. Sarah Silverman recently revealed she was fired from a movie after producers found a sketch from 2007 — that she has said she deeply regrets — in which she wore blackface make-up.