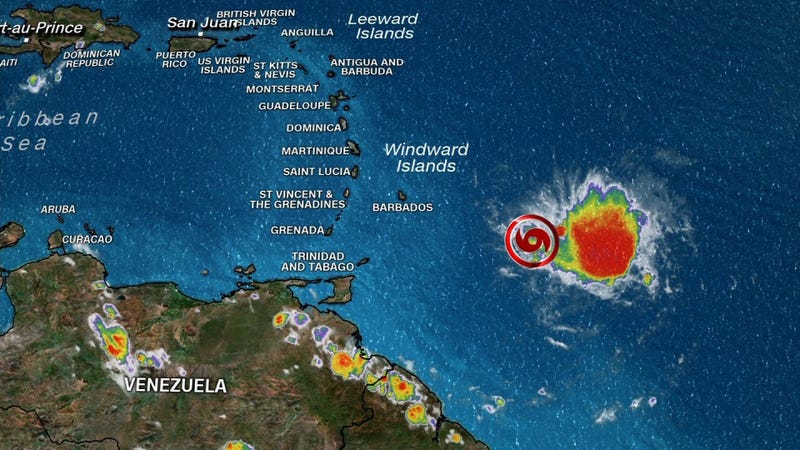 By Holly Yan and Christina Maxouris, CNN
(CNN) -- Another menacing storm is on track to slam the Caribbean, including Puerto Rico, an island still grappling with the devastation of Hurricane Maria.

"Hurricane watches and tropical storm watches and warnings have been issued for parts of the Leeward and Windward Islands, where Dorian is expected move through on Tuesday morning," CNN meteorologist Dave Hennen said.

"The storm is still forecast to be a hurricane as it approaches Puerto Rico and the Dominican Republic on Wednesday and Thursday."

By the end of the week, what's left of Dorian is expected to move toward the Bahamas and possibly southeastern parts of the mainland US.

"But it is still way too early to forecast impacts," Hennen said.

A tight but powerful storm

"Life-threatening surf and rip current conditions" are possible in parts of the Lesser Antilles, a string of islands stretching from the Virgin Islands to Grenada.

Dorian is also expected to dump up to 4 inches of rain over the islands, as well as Barbados and Dominica, through Tuesday.

Dorian is considered a very compact storm, with tropical-storm-force winds (those ranging from 39 mph to 73 mph) extending only 45 miles from the center.

But don't let that fool you.

The storm will intensify when it moves past the Lesser Antilles and into the Caribbean Sea on Tuesday, CNN Meteorologist Karen Maginnis said.

By the time Dorian's done, parts of Barbados and the Windward Islands could be deluged with 6 inches of rain, the hurricane center said.

Tropical-storm-force winds and rain are expected to lash the southwestern part of Puerto Rico, with the Dominican Republic expected to get hit harder.

Puerto Ricans are scrambling to stock up on supplies before Dorian approaches Wednesday evening.

Many are still reliving nightmares from Hurricane Maria, which killed thousands of people in 2017 and left almost the entire US territory without power for weeks.

"Thankfully I've been preparing since May," said Krystle Rivera, whose family has been stocking up on water, canned food and gas in anticipation of the hurricane season.

When she visited a Sam's Club on Sunday, many shoppers were stocking their carts full of bottled water.

In Barbados, which could get pounded with 8 inches of rain, Caroline Weber said "people are going crazy."

"The supermarkets are packed. The roads are packed," said Weber, who just moved from London to Barbados a week ago.

"I have supplies of water and a lot of food. ... I just have to wait and see what's happening," she said. "Freaking out now is not going to help. I'm just going home, charging my computer and phone in case the power goes."

We're in the peak of hurricane season

Dorian is the fourth named storm of this hurricane season. Generally, the season reaches a peak in the eight weeks surrounding September 10.

Two-thirds of all the storms produced in a typical season occur during this period.

That's because conditions in the tropics become ideal for storm development. By the end of August, water has typically warmed to the mid-80s in many parts of the region.