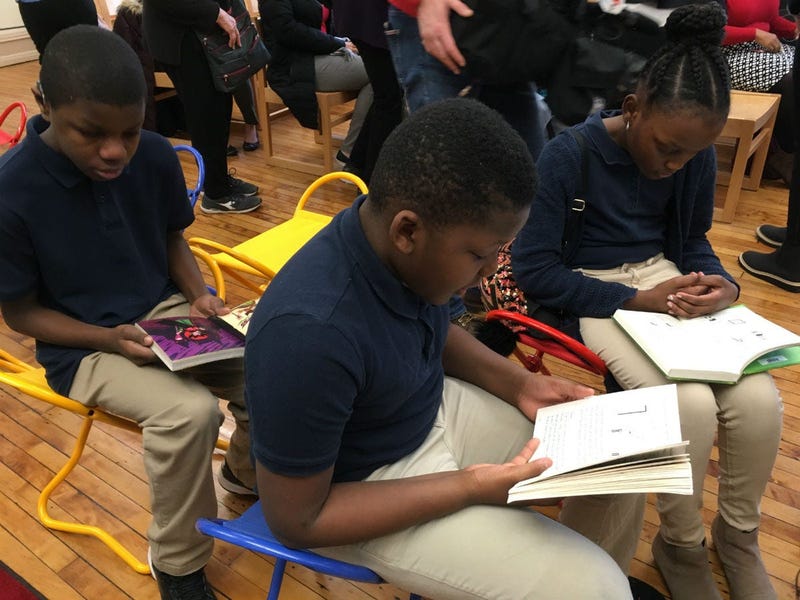 PHILADELPHIA (KYW Newsradio) — With a snip from a pair of oversized scissors, the ribbon was cut ceremonially on Monday morning, reopening the library at Bache-Martin Elementary in Fairmount.

With a snip, the crowdfunded library at Bache-Martin Elementary School is ceremonially reopened. pic.twitter.com/xfz5zszvTk

It had been a casualty of severe budget cuts seven years ago. But in the last year and a half, the nonprofit Friends of Bache-Martin raised $90,000 to pay for 10,000 new books, new furniture, and a part-time librarian.

"We used the power of community crowdsourcing like Pledgecents, and people heard about our cause and they wanted to help. So they donated funds so that we could purchase new books, and not just wipe the dust off of the old books," Jerilyn Dressler, the Friends' board president, said.

The library has actually been open since November.

Catherine Vernon, a retired teacher hired as the library coordinator, works two-and-a-half days a week. She has seen students transformed.

"Well for one thing, they're reading," Vernon said. "And the teachers are very excited about that. Because the children come to them and say, 'May I go get a book from the library?' They are reading."

Philadelphia has fewer than a dozen full-time certified librarians. Superintendent William Hite says community fundraising is one path to getting schools what they need.

"We don't fund it correctly, right? We don't fund it fairly," shje said. "We don't make sure that funds get to the schools that need it most.  And Pennsylvania has a lot of work to do in this area."

Until then, Dressler says she hopes Bache-Martin can serve as a model for other schools seeking to fill needs.