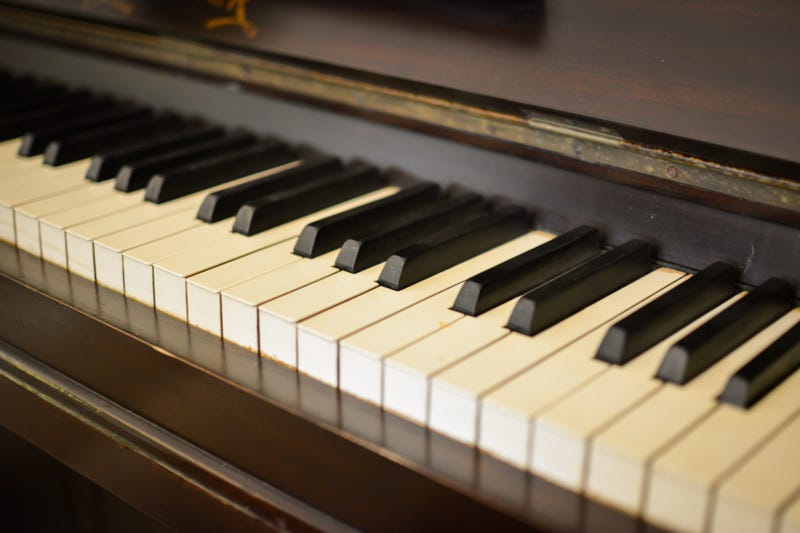 Embellished with curls of carved woodwork, the 9-foot-long instrument is a remarkable example of a rare Victorian-era keyboard, one that also won a piano manufacturing competition at the Centennial International Exhibition of 1876 — the first official World's Fair in the U.S. (Philadelphia, specifically), which coincided with the 100th anniversary of the signing of the Declaration of Independence.

According to the National Piano Manufacturers Association, nearly 365,000 pianos were sold in 1910 — back when a keyboard in the parlor was considered a signal achievement of middle-class status. Around 2005, more than 95,000 units were sold in the U.S., declining even before the 2008 recession tumble to a holding pattern just around 33,000 in recent years.

Even though Americans aren’t buying as many new pianos these days, we’ve created mountains of them that eventually have to be disposed of, even if they’ve seen generations of use.

But the dump doesn’t have to be their only fate.

“Restoring a piano is a beautiful way to lessen our carbon footprint,” said Rich Galassini, co-owner of Cunningham Piano, whose Germantown factory refurbished the Centennial Steinway.

“There are parts on a piano that simply wear down over time, whether it takes 50 years or 100 years,” he said, and such action parts must be replaced with new elements in a full restoration. “But the structure of the instrument — the beams, the pedal assembly, the rails that the action is put on, the trapwork, the cast-iron frame itself — all these things are saved.”

Those usable parts represent about one-third of the piano but have a colossal impact on the environment when first produced.

“Making a cast-iron frame,” for instance, “you have to smelt iron, you have to pour it, it pollutes the environment,” Galassini explained. “So we save that cast-iron frame, restore it with less materials, using what we can with that instrument and reusing it in the restoration.”

What to do, though, with the stuff that can't be saved, or the pianos that are beyond repair? The metal components stripped out are simply not that valuable, and because of design limitations, they can't easily be fitted to other pianos.

“The cast-iron frame itself could be sold for scrap and has a value of somewhere between $20 and $30,” Galassini noted. “(But) to properly remove a frame from a piano could take many, many hours and be much more costly than that. The high-tensile strings that are in a piano, if we put them all together on a scale, they would weigh ounces. There's not much there.”

The wood, however, offers endless potential and lives on in practical and artistic ways (if you’re skilled enough to build a piano staircase).

Galassini said wood used in today's pianos — including those produced by Cunningham — comes from sustainably managed forests in the U.S. and Canada, but century-old wood from a high-end piano at the end of its usable life is prized for its acoustic values by makers and repairers of other instruments, including string instruments like violins and guitars.

Many members of the maker community welcome the wood as well as other parts scavenged from an old piano. Cigar box instrument-makers proudly "build playable musical instruments out of things that were never meant to make music," such as cigar box guitars and ukuleles, cookie tin banjos, or stick dulcimers.

On a forum devoted to their craft, posters extol the glories of piano guts: "I took the black keys off mine and use them for bridges and nuts, the brass candle holders are now diddly bridges, and if it was in better condition, I'd have taken the tuners too!"

Furniture parts, action parts, pieces of soundboards, and the ivory laminate from antique keys are hankered after by artists, especially as ivory hasn't been used in American pianos since the 1950s. "Piano art is a thing," Galassini added.

If you have a salvageable scheme for those old piano innards, you can take unusable piano pieces off the discards pile at Cunningham's Germantown factory with his blessing. (Just email him first.)

From choosing earth-friendly products, like varnishes and adhesives, when they can, to creating as little waste as possible in the manufacturing and restoration process, Galassini said the gnarly logistics of transporting the pianos are planned with the planet in mind, too.

One case is its educational outreach to the Philadelphia International Music Festival, where Cunningham provides some 40 pianos to the premier summer training experience that draws musicians from around the world. Galassini described getting the instruments to the camp at Bryn Mawr College as a "heroic effort " and one with an unavoidable carbon footprint.

But in an attempt to limit that footprint as much as possible, Cunningham offers the used pianos for sale at a discount on-site after the festival — a win-win that moves the inventory without having to move it back across the Delaware Valley to its three showrooms.

Another way to rescue a piano (or if you have a piano to offload): Piano Adoption is a free site dedicated to finding a new home for pianos before they end up in the local landfill. It has listings for every state.