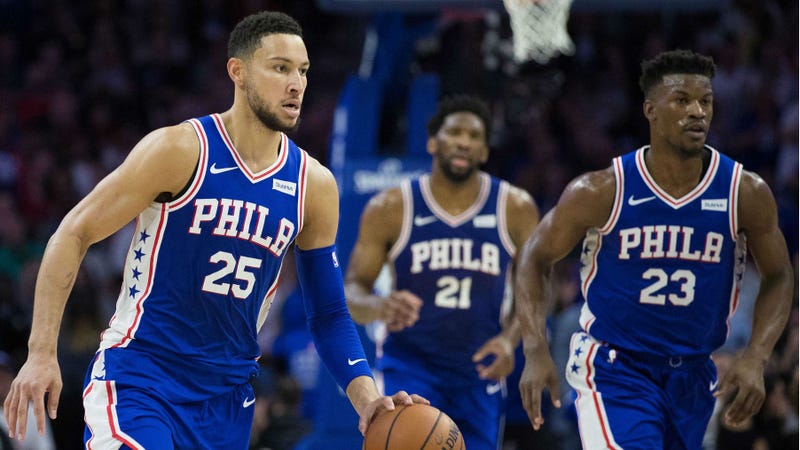 PHILADELPHIA (KYW Newsradio) — Why beat around the bush? This isn’t an ideal matchup for the 76ers. Head Coach Brett Brown referred to it as “dangerous” just over two weeks ago. But, here we are. The Sixers are hosting the Brooklyn Nets in Game 1 of the quarterfinals of The NBA Playoffs Saturday at 2:30 p.m. at Wells Fargo Center.

Here are five things to know about this showdown.

The Sixers are the three-seed in the East thanks to a 51-31 record, while the Nets finished sixth at 42-40. But the two teams split the four regular season meetings, with one of the Sixers victories happening because of a Jimmy Butler buzzer-beating three. In other words, some luck was involved.

Nov. 4: The 76ers were a completely different team in the first game, which was a 122-97 route by the Nets at Barclays Center. Robert Covington, Dario Saric and Markelle Fultz were in the Sixers starting lineup for that game. None of them are with the team. Brooklyn guards D’Angelo Russell and Caris LeVert scored 21 and 20 points, respectively, while backup forward, and Chester native, Rondae Hollis-Jefferson scored 21 points off the bench. Joel Embiid finished with one of his lowest outputs of the season, 16 points on only four of eight from the field in 32 minutes of action.

Nov. 25: Sixers won the second game at Barclays Center 127-125 thanks to Butler’s heroics. He scored 34 with 12 rebounds, while Embiid bounced back with 32 points and 12 rebounds. Brooklyn schot 50-of-88 from the field, as Russell scored 38 and guard Spencer Dinwiddie 31 off the bench, but the Sixers got to the foul line 13 more times and made 12 more free throws. If it wasn’t for Butler’s clutch bucket, it would’ve been another Brooklyn victory.

Dec. 12: The next time these teams met at Wells Fargo Center, Dinwiddie was remarkable, dropping 39 off the bench on 11 of 18 from the field and four of six from three-point range. He flat out couldn’t miss, on top of going 13 of 14 from the foul line. Afterwards Embiid said, "They seem to always get the better of us. I don’t know. We seem to make every guard look a like a freaking Hall of Famer."

The win, at the time, improved the Nets to 11-18. They were considered one of the league’s worst teams, especially after an eight-game losing streak, part of a stretch of 12 losses out of 14 games, that put their record at 8-18. This victory over the Sixers was in the middle of a seven-game winning streak, which helped put them in contention. After dropping eight in a row, the Nets finished the season 34-22. You could argue the Sixers helped give them confidence.

March 28: After three meetings in less than two months, these squads went nearly the rest of the regular season without facing each other. At this point, Tobias Harris was a Sixer, part of a starting lineup that was supposed to take the East by storm. But, because of left knee soreness for Embiid, that unit barely saw the court together at the same time. This was only the 10th game of 21 when all of those five suited up. It would also be the last time that happened in the regular season.

The Sixers won this game 123–110, as Embiid was sensational with 39 points and 13 rebounds. Russell and Dinwiddie were held to a combined 26 points, 13 each.

You can view this game one of two ways. The first is the Sixers finally played to their potential against a team that’s not as good as them on paper. The other is Brooklyn was wrapping up a ridiculous late season seven-game road trip, which had six of those games on the West Coast. The Sixers led by as much as 20, but they only won by 13.

A big reason the starting five has played 10 of a potential 28 games together is because the big guy, Embiid, missed 14 of the last 24 games due to a combination of left knee soreness and load management. General Manager Elton Brand has said he's "optimistic" Embiid will play, but Embiid told reporters today that he's not sure if he's going to play in Game 1.

If Embiid makes it to the floor, his talent should eventually take over after he gets into rhythm. But Embiid gets out of shape very easily, and he could look rusty early on. Not to mention, if Brown is forced to play him close to 40 minutes a game, that may add up to the point it starts to tax Embiid.

If the Sixers are going to win this series, Embiid needs to be the best player on the floor. The key words are "on the floor."

3. Brooklyn's guards are a problem for the Sixers' defense.

Last season, the 76ers held the third best defensive rating in the NBA. This season, they’re about middle of the pack. One of the reasons is their struggle defending against pick and rolls. The Nets are phenomenal at pick and rolls, and it’s why Dinwiddie is averaging 23.8 points per game against the Sixers, while Russell has 21 and LeVert 19.

Not to mention, their ability to drive helps free things up for sharpshooter Joe Harris, who led the league in three-point field goal percentage at 47.4 percent.

Embiid will need to be on the floor to protect the rim, but the team’s best perimeter defenders in Ben Simmons and Jimmy Butler will really need to step up their games against Brooklyn’s perimeter threats.

Simply put, the Sixers lack depth beyond their starting five who barely play.

How grim does that sentence sound?

Their only reliable bench player is Mike Scott, as James Ennis III is nursing a quad contusion that will force him to miss at least the beginning of this series. After them, T.J. McConnell shines in spurts, but struggles in others. Boban Marjanovic only succeeds in favorable match ups, so if the Nets play small ball, it could limit him.

Rookie Zhaire Smith is showing promise, but he’s only played six NBA games because of a broken foot and a serious allergic reaction to food. That being said, Smith plays with tremendous confidence and poise. He could be a surprise unsung hero in this series, especially with his defensive potential.

Meanwhile, the Nets bring Dinwiddie and LeVert off the bench for significant minutes.

5. The Sixers must capitalize on their success at Wells Fargo Center.

As the higher seed, the Sixers have home court advantage to being the best of the seven-game series. They were 31-10 at Wells Fargo Center this season, accounting for 60 percent of their victories. The Sixers averaged more fans at home games than any other team in the NBA this season. Brown said he believes the building will “blow up” for the postseason. They need to capitalize on the luxury of playing on their home floor, in addition to not having to travel far for the road games, thus inviting the possibility of Sixers fans taking over Barclays Center. The Nets are a distant second fiddle to the Knicks in New York City, and that ma y show at Games 3 and 4 depending how the first two games go in Philadelphia.

The Sixers will lose Game 1 because the Nets are feeling good about themselves, and the 76ers barely played together this season. A sense of significant urgency will then pop in and lead the 76ers to a Game 2 victory. With the series tied at one going back to Brooklyn, the Nets will use the energy of being home, even if a lot of Sixers fans make trip, to take a 2-1 series lead. Once again, it will be a wakeup call for the Sixers, resulting in them taking Game 4 to even the series at two.

Then the 76ers talent will come into form and dominate the Nets in Game 5 back at Wells Fargo Center, followed by a victory in Game 6 to close the series 4-2.

It won’t be easy, but the Sixers will move onto the second round because their starting five, if on the court together, are too talented to beat when they get into rhythm.

However, if Embiid misses games, it very well could lead to a Nets upset. Embiid must play for the Sixers to win the series.

CLARIFICATION: This story has been updated to reflect that Embiid has suggested he may not play on Game 1 on Saturday.