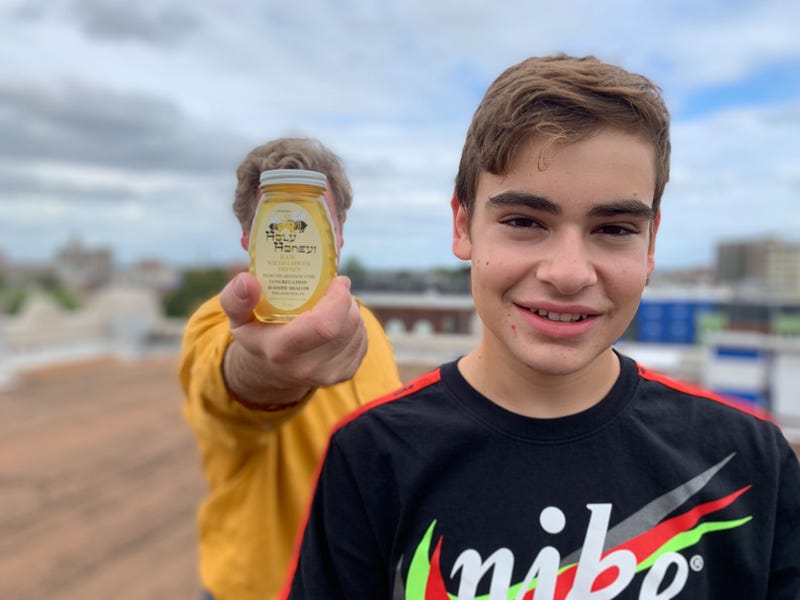 PHILADELPHIA (KYW Newsradio) — The son of a local food critic is creating a buzz in North Philadelphia with the sale of his local honey — just in time for the Jewish High Holidays.

Arthur LaBan, son of Philadelphia Inquirer food critic Craig LaBan, started cultivating a bee hive on the roof of Congregation Rodeph Shalom for his bar mitzvah project, when he was in seventh grade.

"The reason I started this was a lot about the environment and climate change as a whole," he explained.

Now a senior in high school, Arthur said the project reflects the concerns of his generation. His efforts have since expanded to work with bees and honey, this time at his school.

"I am trying to create a new club that incorporates both the kids from Science Leadership Academy and Ben Franklin High School together," he added — two high schools that recently joined forces in the form of a new shared school building.

"Our honey, which is really centered around North Philadelphia, is completely different from the honey in South Philadelphia and West Philadelphia," he said. "It's something that makes you feel like you're of a place."

While Arthur is planning to leave the area for college next year, he hopes the community will embrace the hives as their own when he's gone.

"I've just learned a lot about how connected everything is," he added.

And like the true food critic he is, Craig reviewed their most recent batch of honey, describing it as light and simple.

"It's light, but it's like sunshine. You absolutely taste a brightness and there's a little mintiness on the end," he said.

Honey sales — available for $15 per 8-ounce jar — go toward a fundraiser for the synagogue.

To hear more about the LaBans and their work with bees, listen to the KYW Newsradio original podcast What's Cooking on the RADIO.COM app.