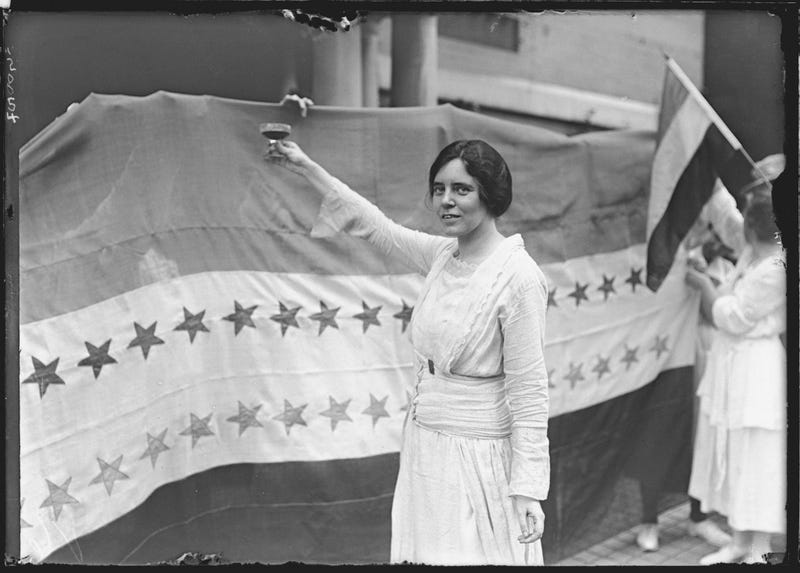 PHILADELPHIA (KYW Newsradio) — Alice Paul was living the life of a thoroughly modern woman in 1906, traveling alone to get an advanced degree at the London School of Economics — but at that point, she wasn’t an activist.

She was engaged in the new profession of social work, trying to help impoverished women, but she was dissatisfied with the lack of systemic change she was able to make.

Then one night, she wandered into a talk by legendary British suffragist Emmeline Pankhurst, whose strident call for women to get the vote made her, let’s say, controversial.

“Hundreds of people went and they brought noisemakers and rotten tomatoes — anything they could to disrupt this talk,” said Lucy Beard, executive director of the Alice Paul Institute, based in Paul’s childhood home in Mount Laurel, New Jersey.

“Alice sat in the audience and she pointed to that as this galvanizing moment for her,” said Beard. “She started connecting the dots between those poor women in the tenements she’d been working with and the idea of women having a voice and a say in who runs their government as possibly a solution for them, and she decided that night to dedicate herself to the suffrage movement.”

Over the next three years, she would be arrested three times for rebellious antics. She once climbed onto the roof of a government building, with a plan to go down the chimney in order to disrupt an official meeting. She also went on several hunger strikes and ultimately was force-fed, a process so painful that newspaper accounts at the time said her screams could be heard throughout the prison.

She brought these tactics back to the U.S. suffrage movement, where she was instrumental in pushing the 19th Amendment over the finish line. She continued her work for women’s rights until her death in 1977 at the age of 92.

Since then, there have been four biographies and two children’s books written about her, including “A Woman’s Crusade: Alice Paul and the Battle for the Ballot,” by former Philadelphia Inquirer reporter Mary Walton, recounting colorful details of her life.

Paul was the oldest of four children in a Quaker family descended from William Penn. She was born in 1885 at Paulsdale — the family farm home in Mount Laurel — and educated at Moorestown Friends School and Swarthmore College, prior to her adventures in England.

Her Quaker faith played a large role in her dedication to suffrage, as it encouraged adherents to have a concern or call to action — though it did lead to some uncomfortable moments when she returned from London.

“One of her command performances was in front of the Young Friends organization,” Beard said. “She got up and spoke in front of a group of 500 people and explained the strategy of what was going on in Britain, and according to reports in the Quaker magazines, she won the crowd over.”

All of it was a puzzle to Paul’s mother. “She got interviewed at one point and said, ‘I’m just so confused. Alice was always such a shy and meek girl,’ ” Beard added.

Paul enrolled in the University of Pennsylvania and became active in the Philadelphia suffrage group. Eventually, she moved on to the National American Woman Suffrage Association, where she worked with Lucy Burns, who she met in England.

Together, they used suffragist tactics, including street-corner speeches and parades, like the one in Washington, D.C., that became a sensation.

Other NAWSA leaders, however, frowned upon her methods, including its president, Carrie Chapman Catt. Paul broke away from NAWSA and instead formed the National Woman’s Party, which was known for “Silent Sentinels” — a group of women who stood silently outside of the White House holding banners demanding the right to vote.

Those pictures of women wearing big hats and sashes over white dresses as they campaign for the vote are part of Paul’s legacy.

After the 19th Amendment was finally ratified on Aug. 18, 1920, many of the women who worked for it ended their activism, but Paul continued. She wrote the Equal Rights Amendment (ERA) and lobbied for it until she died.

So for a woman so critical to the movement, why is she left out of so many stories about suffragism?

Beard said one reason was Paul's own lack of interest in being a part of history.

“She left no diaries. She left no journals. She refused to give interviews,” Beard said. “She was a reticent person who didn’t see her own story as something that should or could be shared.”

But Beard believes there’s another reason, an intentional one.

“She represented the radical part of the suffrage movement, and history generally gets written by the moderates,” she said. “When they sat down to write the final volume of the history of women’s suffrage — a six-volume work that had been started by Susan B. Anthony and Elizabeth Cady Stanton — the person overseeing that was the leader of the moderate side of the struggle, Carrie Chapman Catt.

“She despised Alice Paul and didn’t want to see her get any credit, so she told the writer, ‘You will minimize their role.’ So these radical women were written out of their history. And it was very effectively done, too.”

But according to multiple accounts, if someone mentioned the ERA to her, she became animated and ordered them to call their congressional representatives on the spot to demand passage.

In 1985, a group of ERA activists used the occasion of the 100th anniversary of her birth to rally support for women’s rights. They then founded the Alice Paul Institute and bought Paulsdale for their base of operations. They also managed to acquire her papers, which were being auctioned off by her nephew’s estate — reviving interest in her story and making books like Walton’s possible.

Walton believes Paul’s legacy extends beyond her work for suffrage, or even her later efforts to achieve equal rights for women.

“She is to be honored for her role in non-violent protest,” Walton noted. “That first social protest parade — the first people ever to picket the White House — permits were granted that were never granted before. She really paved the way for generations of protesters to come.”

This series, presented by the National Constitution Center, explores the 19th Amendment in the context of 100 years since its passing. Follow along throughout the month of August as KYW Newsradio shares little-known stories of Philadelphia’s push for equality, and the fight women are still battling today.