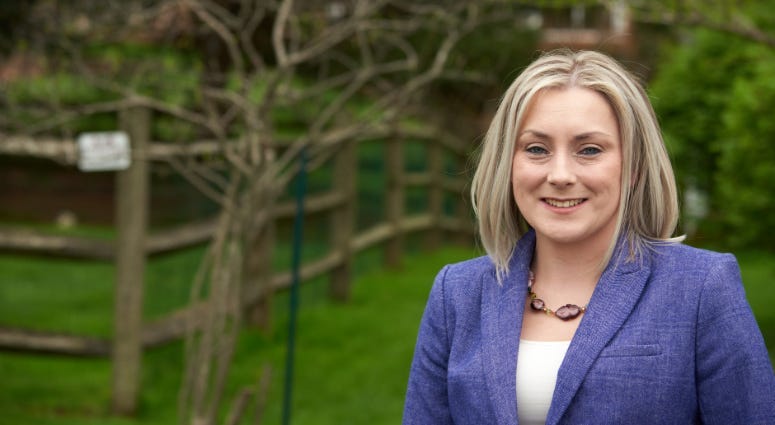 PHILADELPHIA (KYW Newsradio) — Anna Payne has been on overdrive since she was young.

She's a hard worker, loves to volunteer in a number of groups and causes, and has run for several political offices — all at the same time.

She does it all because she has cystic fibrosis, a rare, deadly lung disease.

"When I was born, my parents were told I probably wouldn't even make it out of elementary school, let alone graduate from high school,” she said. “I've always grown up with what I call ‘expiration date syndrome,’ where you're always fully aware that your life expectancy is going to be cut short."

Fortunately, the 32-year-old survives, and thrives. The Langhorne resident has reached many goals that no one expected. She recently got married. She bought a house. She lived longer than many had hoped — nearly twice as long as her life expectancy — and continues to overload her schedule.

Still, Payne always makes time to focus on her health.

"Cystic fibrosis requires me to do three to four hours of breathing treatments a day, take anywhere from 30 to 50 pills, just to eat and breathe,” she explained. “Eating and breathing are basically the two main things we're trying to accomplish."

Payne has never made a five-year plan; she lives day to day with her disease. She admitted she's packing it all in now, one goal at a time.

Payne has held various public positions, currently as auditor of Middletown Township in Bucks County. She was an elected delegate to the 2016 Democratic National Convention.

She was also chosen as one of only two patients to serve on the Pennsylvania Rare Disease Advisory Council, where she uses her voice to advocate for other patients with rare diseases and offers a real-life perspective to the council. She serves on the Drexel Cystic Fibrosis Center’s Family Advisory Council as well.

To date, Payne has raised more then $60,000 for the Cystic Fibrosis Foundation to advance research and support programs, raising $30,000 in 2018 alone.

One of her main motivators is being told she can't do something. She always finds a way to prove that person wrong.

"I really just want to help people. I know that life is short and I don't have a lot of time, and the impact I want to have is to leave something better than I found it,” she said. “That could be in the cystic fibrosis community, the rare disease community or in my local community."

Q: What advice would offer to others?

A: A lot of people get caught up in not fighting for things that they want or believe in, because it's too much. There's a part of you that talks yourself out of everything. If you think about something too long, you're actually going to talk yourself out of it, not into it. So whenever I'm asked to do things or challenged to do things, I don't think about it too long. I just say “yes, I want to do that, I'm going to do that, yes.”

Q: What does this award mean to you?

A: To even be nominated with these outstanding women is truly an honor and a privilege, and I'm still having trouble grasping everything about the award. I'm just very, very honored.

You can meet Payne and the other amazing women honored this year at the KYW Newsradio Women’s Achievement Awards on June 27.