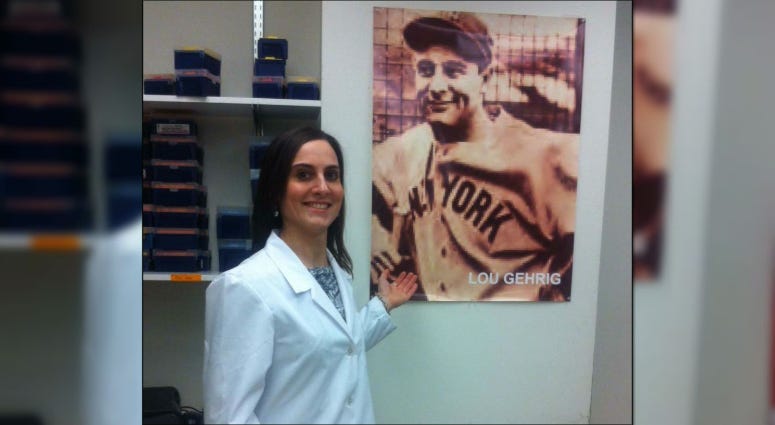 PHILADELPHIA (KYW Newsradio) — Brigid Jensen has always been skilled in the science and mathematics field — it runs in the family. But her determination to cure ALS runs deeper.

When Jensen was 2, her grandfather died from early-onset Alzheimer’s disease. The few lucid moments he had were sparked by her young presence.

By her 20s, she lost her boss and mentor at Waterloo Gardens in Chester County to ALS, or amyotrophic lateral sclerosis. But she noticed a pattern — and a potential career path.

Studying neuro-degeneration was always a part of her consciousness, and the now 32-year-old wanted to help those who needed it most the best way she knew how: through science.

“I settled into wanting to study ALS because of my previous exposure to people with that disease and there being very little knowledge about what was going on,” added Jensen, who is now a Ph.D. postdoctoral research fellow at Thomas Jefferson University’s Weinberg ALS Center.

Mentorship also played a significant part in Jensen’s success. A long list of female scientists inspired her to discover her voice in science, as well as her passion for giving back. With the support of her mentors, she had the confidence to become a scientist at a professional level.

Jensen is also a founding member of a mentorship program, NMDA (Jefferson Neuroscience Mentoring, Development and Activities Council), a group created to further professional development and enable outreach for graduate students. Through the program, she’s able to pass along what she’s learned to others.

“The female bosses in my life were also my mentors (who) fostered in me a love for research and led me to want to give back,” she said. “Now, being a post-doc allows me to interact with students and help those students grow into their own scientists.”

When she’s not in the lab, Jensen dabbles in graphic design and martial arts.

“I’ve been very lucky to take my personal interests and be able to convert them something that works in my professional life,” she said, “like movement classes and take that to kids and adults in the community, because they need it too.”

Jensen hopes to find a cure for ALS, but mentoring others in the field is a good start.

Q: Tell me about your story and how you got to where you are.

A: I always had a love of science and I was influenced very early on and knew I wanted to do research on neuro-degenerative diseases. … My teacher in high school gave me very good advice that I followed. He said, “Go to a college that will give you a wonderful foundation.” So I went to the University of Pittsburgh, which had a very strong math and science base.

I studied molecular biology, chemistry and neuroscience. That's where I decided I wanted to pursue research as my career and go on to graduate school, post-doc and overall academia.

After undergrad, I had the world at my feet, and went to the University of Pennsylvania for graduate school and got fantastic mentoring there, where I did research on HIV-associated neuro-cognitive disorders. There, I settled on studying ALS because of my previous exposure to people with that disease and because there was very little known about the disease. Now, I'm at Jefferson Weinberg ALS Center, studying molecular mechanism of ALS, trying to find a cure.

Q: What would you like to achieve over the next five years?

A: I would like to advance my career to the point where I would have my own lab and be able to have graduate students and post-docs working under me to further ALS research, and, of course, eventually cure ALS. But I would also like to be at an institution where I can continue my professional outreach — things like what I am doing now, such as ran a women's self-defense class at work, further coupling my extracurricular interests with my professional life.

Q: What advice would you offer to others?

A: You're going to run up against a lot of failure and you're going to give up and quit, but if you get up every day and do your best, things do succeed. … It isn't about the quantity of what you're doing. It's about the quality. Impacting one individual is enough.

Q: What does this award mean to you?

A: I feel that it's such a tremendous honor, and even more so to be with such an esteemed group of women is even more wonderful. … Being able to tell our stories and work together, we will be able to make an even greater impact.

You can meet Jensen and the other amazing women honored this year at the KYW Newsradio Women’s Achievement Awards on June 27.