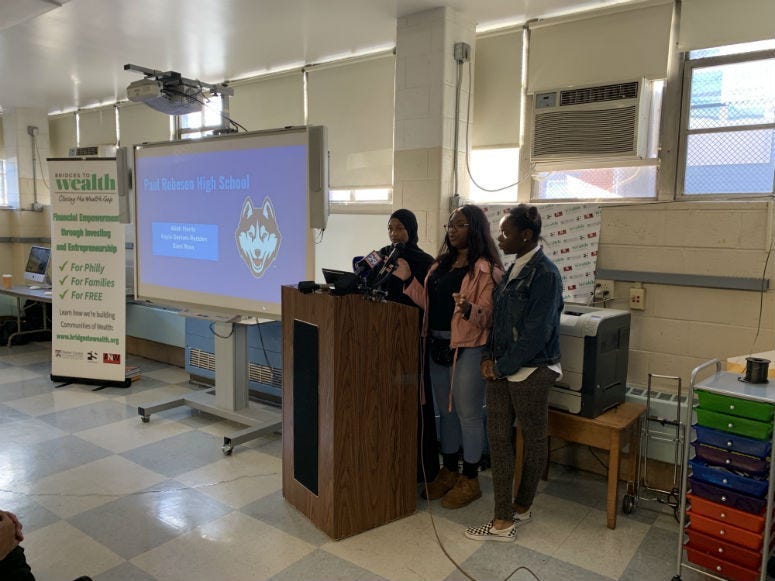 PHILADELPHIA (KYW Newsradio) — Philadelphia officials launched a new program Monday to teach students at two West Philadelphia high schools how to start and run a business. It's called Project Elevate, and it's more than just an education program — it's the city's effort at atonement for two men who were falsely arrested.

There's a saying for what Rashon Nelson and Donte Robinson proposed in the uproar after they were led out of a Starbucks in handcuffs for no good reason, as Penn provost Wendell Pritchett noted.

"When life gives you lemons, you make lemonade," Pritchett said.

Instead of suing the city, Nelson and Robinson asked that it provide $200,000 in seed money for Project Elevate, the kind of program that might have given them a head start in their careers.

It will be piloted at their respective alma maters, Bartram and Robeson high schools, with Penn's Netter Center providing instruction in financial literacy and entrepreneurship.

Mayor Jim Kenney says the men hope it will be more than just a class.

"The program will not only help students realize their dreams of business success but they also envision the program helping to close the wealth gap in Philadelphia's neighborhoods," Kenney said.

It's a tall order but the students say they're ready.

"It seems like a great program. I'm looking forward to it," said Muawiyah Graves.

"It's going to open up a lot of doors and more opportunities for us that we never had. This is different," said Tyrenea.

Nelson and Robinson did not attend the launch.

They made a separate settlement with Starbucks for an undisclosed amount of money, kept secret by a non-disclosure agreement.