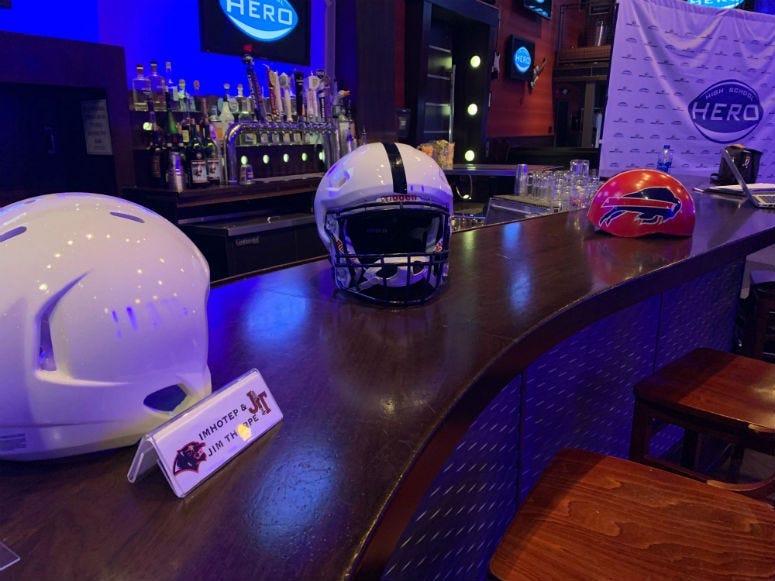 PHILADELPHIA (KYW Newsradio) — A current NFL player and a former player use their heads to help some high school football players reduce their risk of getting a concussion.

Lisa Ertz is Philadelphia Eagles all-pro tight end Zach Ertz's mom, and says she still worries about his safety anytime he's on the field no matter how big and strong he is.

"My second son had to stop playing football, had to stop pursuing his dream because of head injuries and at that time, I decided I was going to make a difference in this space," she said.

This led Zach Ertz and their organization, the Ertz Family Foundation, to donate Defend Your Head’s ProTech helmet covers to Kensington High School.

Ertz's work was honored Monday by ProTech, but she says there's still more to do.

"My goal is by the end of 2020, that every high school player has a ProTech on top of their helmet," she said.

"I'm elated. I'm elated. It's a great thing for our game," said the school's John Davidson, who believes the equipment will help them in the long run and not just in the game.

"We've always changed the way we tackle," Davidson said. "We've talked about concussion protocol, monitoring the number of contacts we have in practice. This is another layer that I'm looking forward to."

Bradley made it clear that players cannot be too cautious when it comes to protecting your head.

"It's going to hit at some point in time," he said. "So it's just great that it's safe for now than when I played, and years gone by. It's good to see the kids playing the game better and safer with more protection."