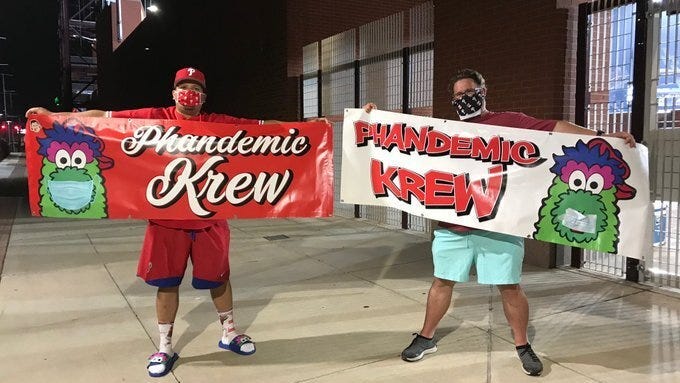 Members of the Phandemic Krew have been gathering outside Ashburn Alley since the start of the season, and the ruckus they’ve raised has inspired others to join the party.

“First time out was about two weeks. I saw all the publicity they were getting on TV and Twitter. Lot of fun and I’ll be back,” said John Marron from Warrington.

One member said he’s gone through at least 100 air horns this year already.

“One section’s for the ladders, where you can see the infield pretty good. The third gate over here is where the TVs are at, and the third section in the middle is just where people mingle and move in and out,” Alvarado explained.

Many bring folding chairs to sit and watch the game on the high-definition TVs set up there.

The ladder section gives a select group of fans such as Aaron Endres a distant view of the action on the field.

Krew co-leader Brett MacMinn said he expects the crowd to swell if the Phils make a run for the playoffs, which could be a problem with the city’s limit on outdoor gatherings.