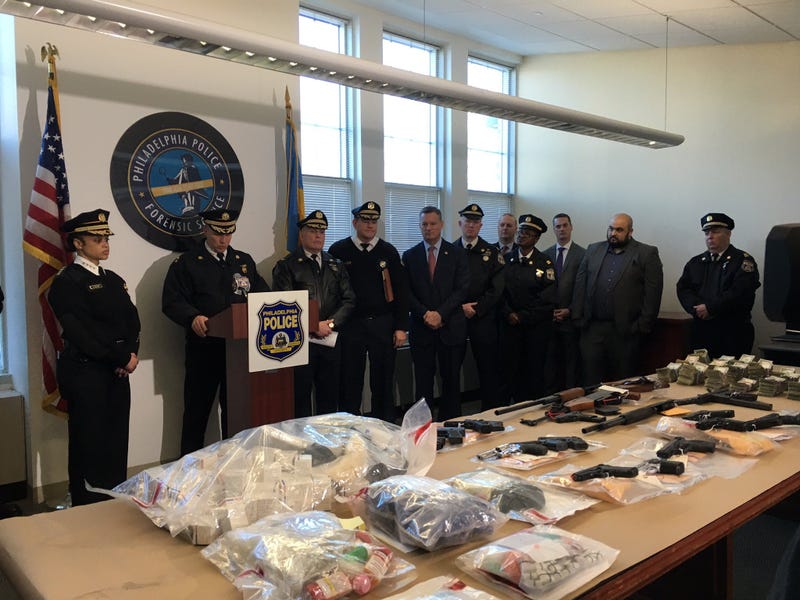 PHILADELPHIA (KYW Newsradio) — More than $1 million worth of drugs and weapons are now off the streets of Philadelphia.

Philadelphia police are calling their recent initiative a community success after $1.2 million in drugs and weapons were recovered along with more than $75,000 in cash.

The police department, the FBI and the Drug Enforcement Administration teamed up with the city's diversion program in an effort to get guns and drugs off the streets.

The three-day anti-crime initiative began on Feb. 12 in the city’s east division, focusing on areas impacted by spikes in crime and gun violence.

Commissioner Danielle Outlaw is giving credit not only to the cross agency partnership but directly to the communities that spoke up.

"I really wanted to stress the collaboration among local, state and federal partners here. And with the input of the community, the magnitude of what this is, is amazing," Outlaw said.

But once the guns and drugs are off the street, how will the initiative further benefit the neighborhoods affected?

Kurtis Augustine with the city says that's where the diversion program comes in.

"We're really trying to do some fusion work between law enforcement and public health to try and offer appropriate support to break the cycles of addiction and poverty," Augustine said.

Outlaw said while the initiative was designed to disrupt narcotics operations and intercept illegal firearms, the real work and success goes deeper.

She says it was also meant to improve communication between communities and police.

Police say 20 illegal firearms were confiscated and nearly 300 arrests were made during the three-day initiative.