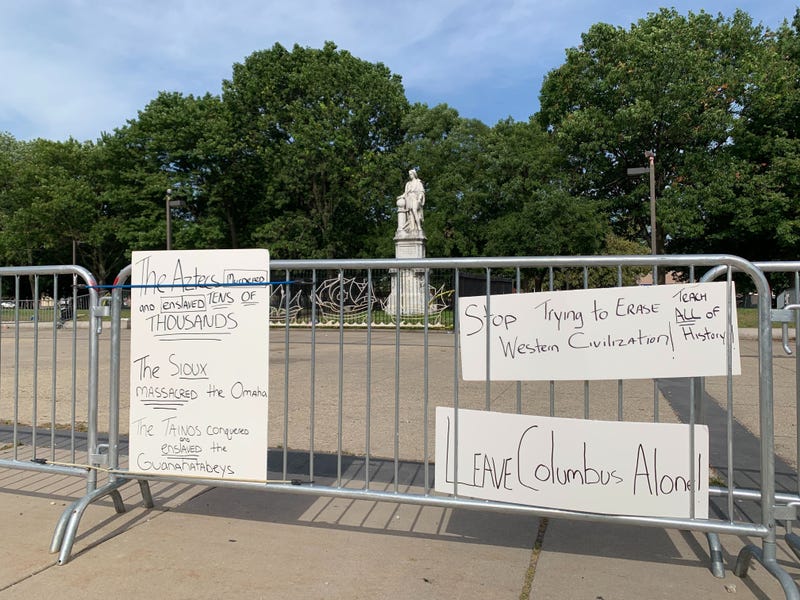 PHILADELPHIA (KYW Newsradio) — Armed vigilantes were seen carrying bats and guns around the Christopher Columbus statue in South Philadelphia's Marconi Plaza through the weekend, as debate intensifies over what to do with it.

Metal barricades now surround the statue. There are some signs posted as well, reading “Leave Columbus Alone” and  “Stop Trying to Erase Western Civilization! Teach All of History."

Mayor Jim Kenney tweeted Sunday morning, "All vigilantism is inappropriate." He also said an apparent attack on a journalist Saturday night is being investigated.

We are aware of the groups of armed individuals “protecting” the Columbus statue in Marconi Plaza. All vigilantism is inappropriate, and these individuals only bring more danger to themselves and the city.

He also said they’re aware of an assault caught on camera being investigated, as well.

Over the past couple of weeks, the civil unrest in Philadelphia and around the world has led to controversial landmarks coming down, including the Frank Rizzo statue in Center City and his mural in the Italian Market.

More recently, a statue of Columbus in Camden's Farnham Park was decapitated by neighbors Thursday night while city crews removed it. The head was later seen at a march against racism on Saturday.

"They're trying to erase our heritage," he charged. "They are doing the same thing Columbus did. Columbus went in and took away the Native Americans' heritage."

Lloyd Pratt was also part of the group tasking themselves with protecting the statue.

"It’s more about what you’re gonna change if you tear that statue down," he said. "History is history, it’s not going to change. Where’s it gonna stop?"

Police presence in front of the Columbus Statue in South Philly this morning after some tense moments. Reports on @KYWNewsradio pic.twitter.com/F3iJdWema2

Peter Erickson came to see the statue after hearing about it on the news. He remembered learning about Columbus in school, but not the entirety of it, not the genocide of indigenous people and taking of their land.

"I’m not sure if it’s appropriate to teach 6-year-olds about genocide, rape and slavery," he said.

Erickson believes having a statue of Columbus in a public park symbolizes acceptance.

In a statement Monday evening, Mayor Jim Kenney announced plans to start a “public process” to consider the  statue’s future. In a letter, he asked “the Public Art Director to initiate the appropriate process through the Philadelphia Art Commission.”

The city has not yet made a decision on whether or not to move the statue.

For now, a “boxing apparatus will be installed around the statue tomorrow (Tuesday) in order to preserve it while the Art Commission process is followed.”