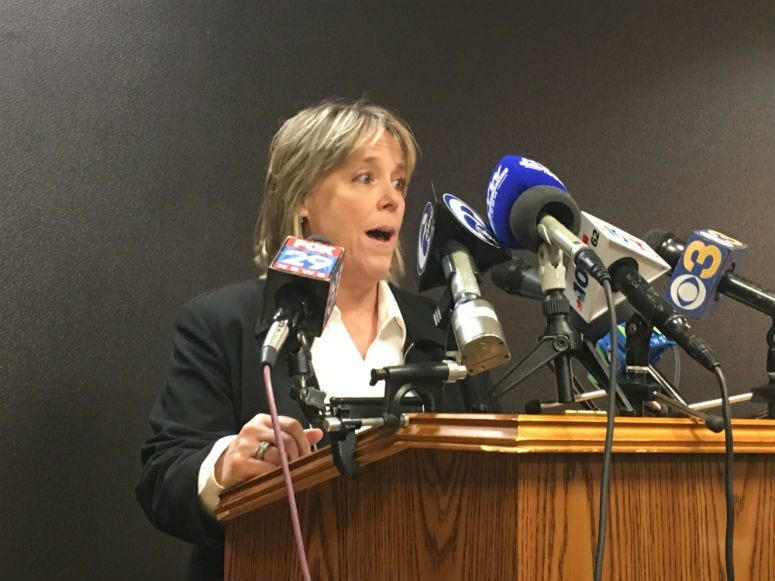 EGG HARBOR TOWNSHIP, N.J. (KYW Newsradio) — Three women have filed a discrimination lawsuit against the Atlantic County Prosecutor, alleging a pattern of gender discrimination which led to one of the plaintiffs being fired and another to retire early.

The suit, filed in Superior Court, contends that Prosecutor Damon Tyner and two male assistants have created what’s called a “toxic culture for women” in violation of state and federal law.

Take Diane Ruberton, who worked there for 23 years, including a short term as acting Prosecutor before Tyner’s appointment. Within months, she confronted Tyner about unequal pay, assignments and treatment for women, only to be unceremoniously shown the door.

“That sent a very clear and unequivocal message to every employee of the Atlantic County Prosecutor’s office and every woman in that office,” she told reporters at a press conference, “that if you speak up, if you dare to question his culture of cronyism and sexism, you will be fired too.”

Longtime Detective Heather McManus says she was forced into retirement.

“None of us involved here today ever envisioned a time we would be forced to stand up against what we believed to be retaliated by someone who took an oath in this state, and in this county, to faithfully, justly and impartially execute the duties as the county prosecutor,” McManus added.

The third plaintiff, Donna Fetzer, was demoted but remains on the job.

The 90-plus page action seeks reinstatement and unspecified damages.

Attorneys for the three women say the New Jersey Attorney General is looking into operations of the office, although a spokesman for the office would not confirm that.

Tyner, who took office in 2017, issued a statement shortly after the lawsuit was announced.

“It is apparent that the plaintiffs are living in an alternative universe. The very same conduct they accuse me and the members of my administration of committing was actually carried out by them and others during their brief, ineffective period of leadership of the Atlantic County Prosecutor’s Office. I am disappointed that this has drawn attention away from all of the important work that the women and men of the Atlantic County Prosecutor’s Office accomplish on a daily basis. In 2019, we look forward to continuing to fight the scourge of the opioid epidemic, human trafficking, sexual assaults and violent crime," the statement read.