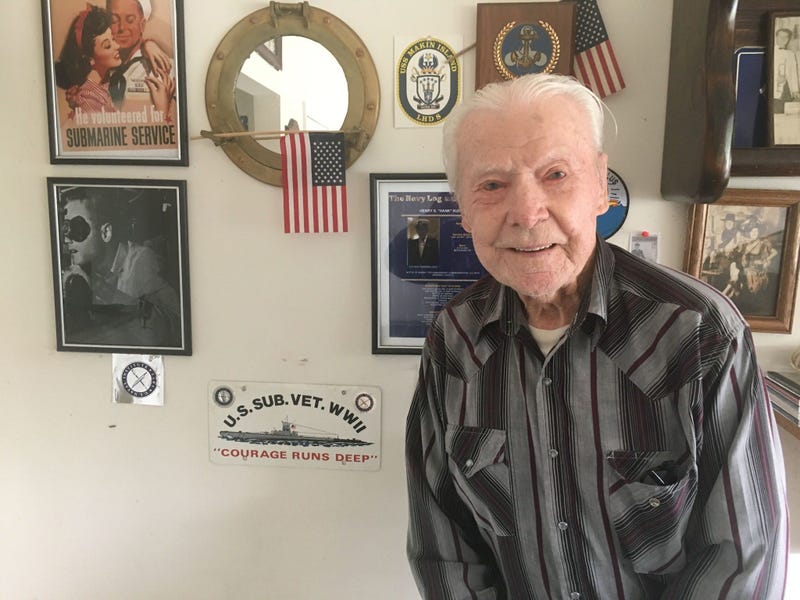 PHILADELPHIA (KYW Newsradio) — The Battle of Midway was a big gamble, according to then-Chief Gunner's Mate Henry "Hank" Kudzick.

The sailor was aboard the USS Nautilus, the submarine that fired torpedoes and sank a Japanese carrier during the historic World War II battle in the South Pacific.

Kudzick, who now lives in Northampton, recalled being on watch and spotting the first Japanese ships as the submarine patrolled an area off Midway Island, awaiting the arrival of a Japanese attack convoy in early June 1942.

The sub captain decided to mount an attack. But, Kudzick remembered, there was a big problem.

"The torpedoes hit — every one of 'em," he said calmly. "But not one of them exploded."

Now alerted to the presence of the submarine, Kudzick said the Japanese ships began flooding the area with depth charges.

The Nautilus, however, was deep enough and suffered only minor damage.

A few days later, on June 4, 1942 — only six months after Japan's attack on Pearl Harbor — Kudzick said a watch aboard the submarine spotted smoke near Midway and the shadow of a ship.

The Nautilus surfaced to investigate, he said, and they identified the damaged Soryu, a Japanese aircraft carrier. The carrier had been pounded by American planes but was still afloat.

Kudzick said the Nautilus captain decided to finish the job, hoping another round of torpedoes would work this time.

"He fired one, two, and three," Kudzick said. "Guess what? We heard one explode. And, then we heard the other one explode.

"The third one did not explode, but two torpedoes were enough to sink the Soryu."

Service branches argued over who really deserved the credit for sinking the Soryu, but Kudzick said a Japanese historical account from one of the sailors aboard the Soryu settled the disagreement — in favor of the Nautilus.

"The one that didn't explode, it hit the Soryu and the nose busted off and he hung onto that torpedo," Kudzick said. "And that's what he did to save himself, by hanging onto the torpedo that came from a submarine."

After leaving Midway, Kudzick said the Nautilus was sent to join a U.S. battle group assigned to attack the northern part of the Japanese island of Honshu.

"We sunk five more ships there," he added. "And (the Japanese navy) were after us. They were pounding us (with depth charges) and everything was breaking inside, but we managed to hold together."

The Nautilus skipper pulled a gutsy move, he recalled of one instance, by maneuvering under a docked Japanese ship in the harbor and hiding beneath it.

"Finally, after about a day and a half, we had to get out of there because the batteries were getting low," Kudzick said.

Two Japanese ships had strung a cable across the harbor to try to snag the sub, but Kudzick said the Nautilus managed to avoid it.

"The dear Lord saved us," Kudzick declared. "We got out of Honshu and got back to Pearl Harbor."

But for Kudzick, the Battle of Midway was one of the most memorable battles of his 14 war patrols aboard the Nautilus, and later the submarine USS Gar.

The now 94-year-old continues to share his story so that those who fought — and those who died — will not be forgotten.

"Especially the Marines we had to bury at sea," he added earnestly, his voice trailing off. "We were young, and so were they. That was so hard, so hard."