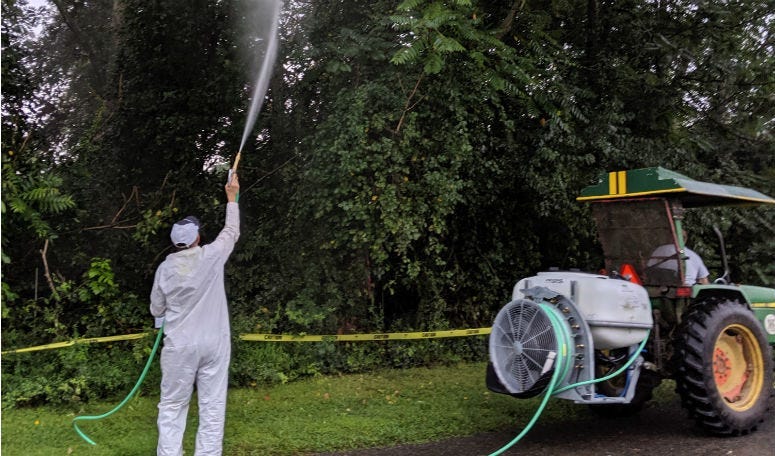 PHILADELPHIA (KYW Newsradio) — Researchers testing a biopesticide to control spotted lanternfly in areas of Norristown Farm Park this past summer are encouraged by the results and say they may have discovered a very effective weapon to stamp out the invasive pests.

Heather Leach, a spotted lanternfly specialist at Penn State's entomology department in State College, said a fungal pathogen contained in a spray used in July by the researchers was successful in killing spotted lanternfly nymphs swarming the trees at the park.

"When we first did this, we found about two weeks after we sprayed we got a 50% reduction in the population in those plots," Leach said. "So we were really pretty encouraged by this data, especially since this was just one application."

Leach said the biopesticide doesn't affect humans, animals, streams or other bodies of water and fish living in them. But it is proving deadly to the spotted lanternfly.

She said the researchers concluded the spray was most effective on the nymphs although a spraying of adult infestations in August at the park did kill a number of the insects.

"It's not going to be a silver bullet because there's just so many spotted lanternfly out there that there's no way we can get that fungal pathogen everywhere," Leach said. "But I do think it has a lot of promise."

The next step in the research, Leach said, is a wider application of the spray.

"Can we also do this in people's back yards or in vineyards to get control of the population that way?" Leach asked. "We do see this as an option going forward. It's an environmentally friendly, more sustainable method."

That is on the calendar for spring.

Meanwhile, Leach said this spotted lanternfly season is coming to a close and the adult insects are beginning to lay their eggs before the first frost puts an end to their life cycle.

"The spotted lanternfly that you see out there are a lot fatter," she said. "They have these big, yellow abdomens. They're starting to develop those egg masses and starting to lay those as well. So, during this period of time they tend to be extremely active, they tend to go into flight a lot."

Leach said the eggs usually resemble a putty-like substance or a patch of dried mud.

You'll find them on trees or wood or metal surfaces such as lawn furniture, swingsets, and fences.

She said scrape them off with a credit card into a plastic sandwich bag filled with some rubbing alcohol and throw them away.

But Leach said if you see any live bugs - stomp on them and kill them.