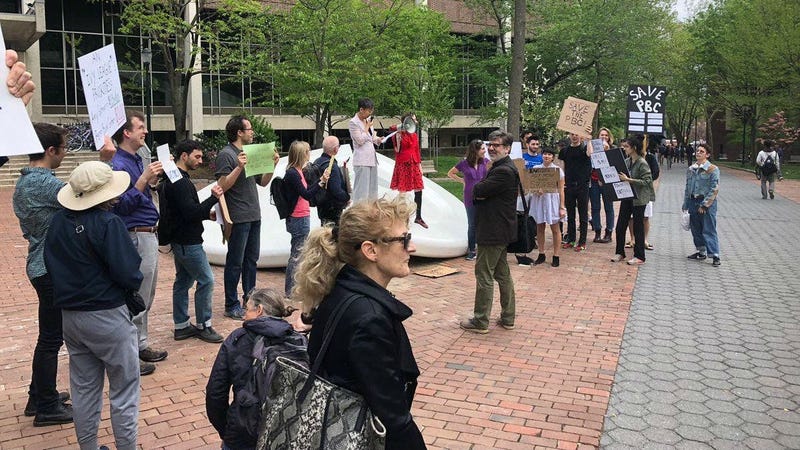 PHILADELPHIA (KYW Newsradio) — As brick-and-mortar stores struggle to compete with online sales across the country, supporters from the University of Pennsylvania community have gathered to stop a local bookstore from closing its doors for good.

Ashley Montague, co-owner of Penn Book Center at 34th and Sansom streets, said the trouble began a couple of years ago with textbooks.

"We would always check the Amazon prices to try to say, 'OK well this is what they're selling it for, we might lower our price to try to get close to their price,'" she said. "But when they're selling the book for what we're paying for it, obviously that is a price we cannot match."

As a result, Montague said they stopped selling textbooks because they could no longer afford that business model.

"We expanded our hours, we changed the layout of the store, increased the number of events that we had in the store to the point where now I think we have over 100 a year," she added, but that wasn't enough.

The owners announced the store would close after more than 50 years in the business.

But that's when Penn professor Chi-ming Yang stepped in. She started a petition urging the university to help save the store. It now has more than 4,000 signatures and a response from the provost's office.

First day of @PennBookCenter protest readings! Super huge thanks to Chi-ming Yang of @PennEnglish and our good friends at @bluestoopphl for organizing. We'll be back every day this week! https://t.co/NEbXpawvgG

Additional rallies this week are a display of community support for a business that gives back to the community, which Yang said sets Penn Book Center apart from Amazon and chain retailers.

"It's very rare to find a space where you can have interaction across different age groups and between faculty and students and community members," she said, "both through the kind of books they sell there, but also the amazing author events they hold at the store."