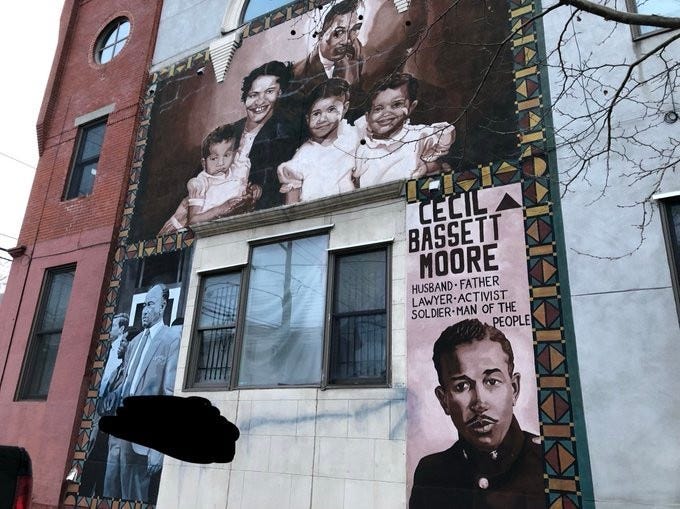 PHILADELPHIA (KYW Newsradio) — An investigation is underway after a mural of Cecil B. Moore was vandalized over the weekend. The cleanup has already begun.

The mural at North Bouvier and West Jefferson streets is a symbol of the civil rights movement. It reads, "husband, father, lawyer, activist, solider and man of the people." Moore was also a U.S. Marine, and is known for leading the movement to desegregate Philadelphia's Girard College.

But over the weekend, residents and City Council members were shocked when they saw a curse word and a racial slur spray-painted on the mural with an arrow pointing towards the the activist.

Karen Asper Jordan, president of the Cecil B. Moore Philadelphia Freedom Fighters, came out to survey the damage Sunday morning.

"It's just disheartening, but I know the City of Philadelphia and the Philadelphia Police Department are gonna find out who did this," she said.

Jordan said she saw Moore growing up in North Philly, and called him one of the greatest men Philadelphia had ever seen.

"There are a lot of people still alive that remember Cecil, and remember what he's done for this city," she shared. "Many of us and many people would not have jobs today if it had not been for this man."

"Even on a cold holiday weekend," said Mural Arts spokesperson Cari Bender, "we dispatched a member of our crew and we will make further repairs to the mural this week."

Clarke came out in the morning to see the damage for himself. "To see that mural defaced with that language is extremely disturbing," he shared. "You can have your discourse, but at the end of the day, take it out in a different way. Don't deface those murals, because Cecil B Moore meant a lot to a lot of people in the city of Philadelphia and it was extremely hurtful to see that."

Philadelphia police are asking anyone with information to step forward and contact their tip line.