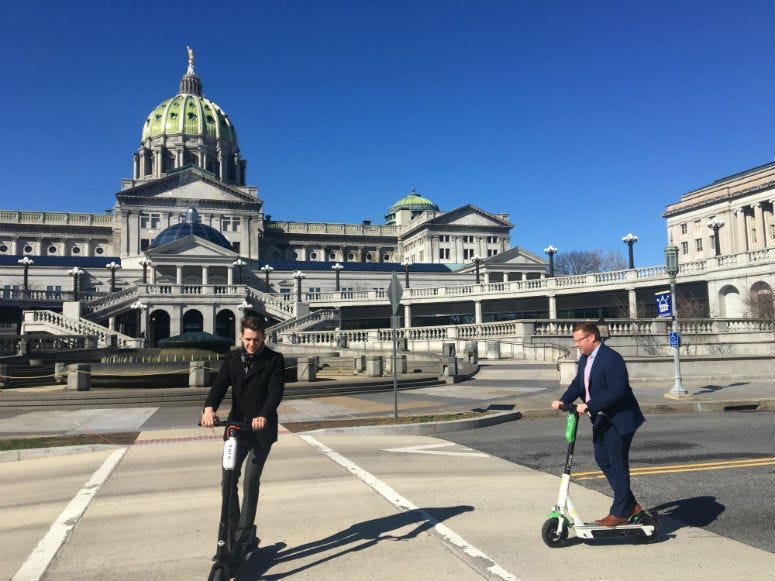 HARRISBURG, Pa. (KYW Newsradio) — The sponsors of a bill to legalize electric scooters in Pennsylvania were on hand as folks were offered free scooter test rides behind the state Capitol building Tuesday. The scooters don’t move too fast and apparently, neither will the bill that would OK their use.

Apart from a stiff breeze, you could almost feel spring in the air as folks gave the scooters a try. The Republican sponsor of a House bill to legalize them, Greg Rothman, says he’s been getting a positive reaction from people.

“First of all, a lot of them don’t understand that motorized scooters aren’t legal in Pennsylvania. And so that’s a surprise to people. And they also understand the importance of being a state that reaches out to millennials, and that transportation needs are changing," Rothman said.

But co-sponsor Stephen Kinsey, a Philadelphia Democrat, isn’t as optimistic about swift action.

“Folks in Philadelphia are pretty excited about it because of the congestion of the city. When I talk to some of my folks outside of Philadelphia, they’re less enthused right now," Kinsey said.

While he believes doubters can be convinced - and the bill is slated to be considered by the House Transportation Committee next month - Kinsey says issues, including those related to safety and taxes, still need to be resolved.