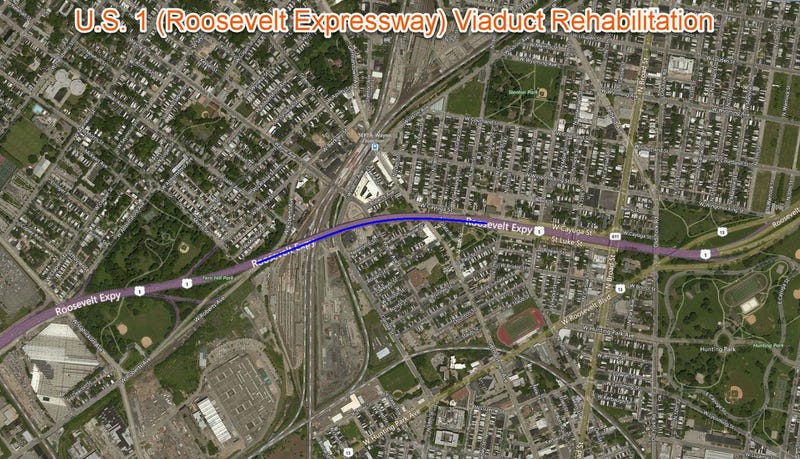 PHILADELPHIA (KYW Newsradio) — Construction crews are about to begin a major project on a span along the Roosevelt Expressway.

At 59 years of age, the old, decaying Wayne Junction Viaduct is a structure that "is at the end of its service life."

Work begins Wednesday on a three-year, $88 million project to refurbish the viaduct, which carries Route 1 traffic over the SEPTA tracks and the Nicetown neighborhood. The route starts just before Broad Street, where Roosevelt Boulevard starts and the expressway ends.

"They have to repair all the steel and deteriorated concrete in the substructures," explained Rudolph. "They have to clean it, paint it and replace a lot of elements. It's a very large job and going to take some time to complete."

The viaduct will remain open throughout construction, and Rudolph said drivers won't feel the impact until spring.

"We'll see lane restrictions during off-peak hours, mainly overnight hours," he said. "But sometimes during the day, 9 to 3. It's a very large viaduct, 2,500 feet."

Rudolph noted when the project moves to the top side of the span later this year, however, detour signs will go up at the Cayuga Street on-ramp.

"That ramp will be closed through most of the duration of the job," he added, "so probably about fall 2022 that ramp will stay closed."