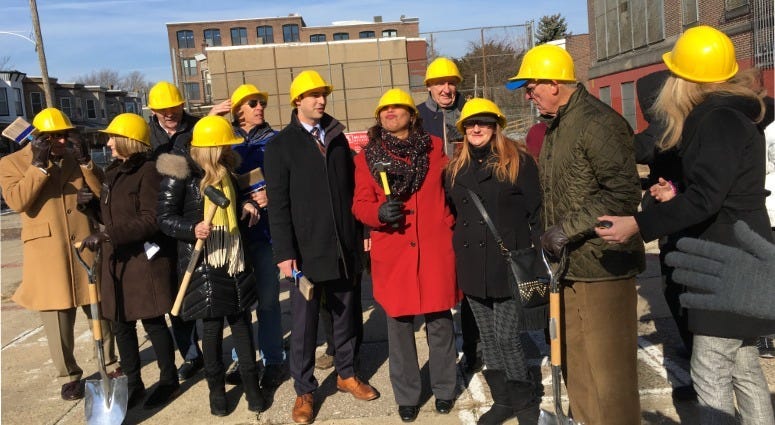 PHILADELPHIA (KYW Newsradio) — Funders and officials of Project HOME gathered in Kensington Tuesday for what was supposed to be the start of construction on the long-planned and desperately needed housing for people recovering from addiction.

There was just one glitch: the government shutdown.

The project to turn the old Willard Elementary School into 42 units of recovery housing — with education and job training — has been in the works for nearly five years, which Project HOME co-founder Sister Mary Scullion, said is not an unusual timeframe.

"There's no quick fixes to homelessness," she said. "Homelessness is indicative of some of our deeper societal problems."

As Project HOME acquired the property, assembled funding and worked with neighbors, the need for it became more acute, as the opioid epidemic grew and encampments of homeless addicts sprouted nearby. Scullion said she was excited to schedule the event this month to mark the start of construction — and then the federal government partially shut down.

"We need one piece of paper signed by (the Department of Housing and Urban Development), so we won't actually be able to start construction," Scullion said, though she went ahead with the event anyway. "Because of the opioid crisis right here, right down the street, it's important to have places of hope for people to begin and continue their journey of recovery."

"With the growth in the epidemic and the challenges, it becomes even more important," she said.

Quiñones-Sanchez has vowed not to allow the district to become more overburdened with facilities that attract drug abusers, but she said this one is welcome.

"Repurposing a vacant building of this magnitude and bringing it to life with programming are going to contribute to the spirit and the feel of this neighborhood," she said.

Construction will begin as soon as the government reopens.