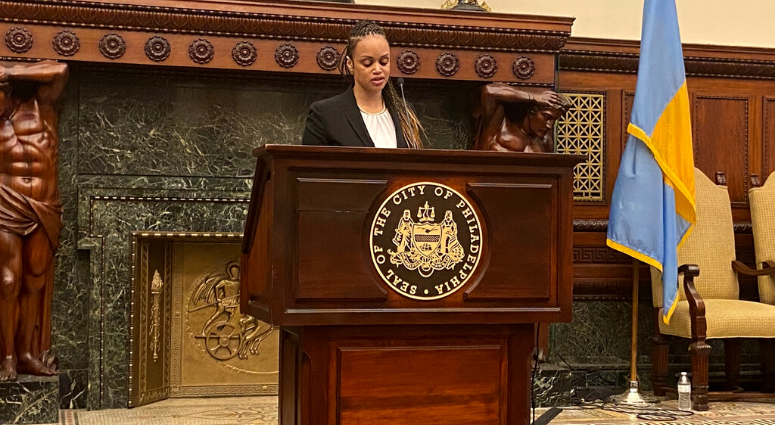 Outlaw, 43, is currently the chief of police for the Portland Police Bureau in Oregon.

Outlaw joined the Portland department as chief of police in 2017, becoming the first African-American woman to hold the position. There, she decreased Portland’s crime rates and addressed new policies regarding excessive force against those dealing with mental health issues.

Outlaw met with city leaders and the media Monday afternoon after the announcement. She pledged to work relentlessly to reduce crime in Philadelphia and to do so in a way that ensures people are treated equally regardless of gender identity, race, ethnicity or sexual orientation.

“I cannot do this alone,” she added. “I ask each of you for more than your support — I ask for your help, your thoughts, your wisdom and your ideas.”

She used a method called focused deterrence to bring down Portland's crime rate, which she says she believes would be effective here as well.

"The use of evidence-based data, making sure we're spearfishing, not casting a wide net, because we know it's a very small percentage of our population that's responsible for the larger percentage of crime, and then making sure there's follow-up throughout the system when we identified who those individuals are," she said.

The Philadelphia Police Department has been rocked in recent months by accusations of racism, gender discrimination and sexual misconduct, plus a violent crime epidemic that has taken the lives of many children in Philadelphia. Outlaw acknowledged that being the first African-American woman to lead the department gives her a unique perspective, and she doesn't take that lightly.

“I understand what I represent. I understand who opened the door for me and I understand that it's also my obligation to open the doors behind me to ensure that in 2020 we're not still talking about firsts.”

In a statement, the mayor noted the Philadelphia Police Department needs reform, and he believes Outlaw is a step in that direction.

“I am convinced she has the conviction, courage, and compassion needed to bring long-overdue reform to the Department. … Outlaw possesses the strength, integrity, and empathy vital to the tasks ahead,” Kenney said in a statement. “With our support, she will tackle a host of difficult issues, from racism and gender discrimination, to horrid instances of sexual assault on fellow officers. These are issues that too often negatively impact women — especially women of color — within the Department. Commissioner Outlaw will implement reforms with urgency, so that racial, ethnic, and gender discrimination are not tolerated.”

FOP Lodge 5 President John McNesby admitted in a statement that the police union hoped an internal candidate would be promoted as the top cop, but “we look forward to a professional, working partnership with Chief Outlaw that includes making our city safer for our residents and our 6,500 police officers.”

“She is straight to the point, straight-shooter, down to earth, and I think she’s not about a lot of the nonsense and hype,” said McNesby Monday afternoon. “She’s right down to business and likes to get things done; approach it head-on.”

“If you listen to what she is saying — dealing with addiction, dealing with homelessness, dealing with concentrated poverty — she is cognitive of that, and I look forward to working with her,” he said. “I am very hopeful and optimistic that she is going to carry out the reforms that she has spoken of so eloquently.”

Outlaw added in a statement that while she is new to Philly, she is not new to the challenges of “big-city, 21st-century policing.”

“Modern policing is data-driven, but the paramount factor is not so easily quantified: trust — the trust residents have that their police force will keep them safe and treat them with respect. I am convinced that trust can be restored, here and across the nation. I am convinced community-police relations can be rebuilt and fortified through dialogue, transparency, and accountability.”

Outlaw said standing for officers and standing for the community are not mutually exclusive, and she looks forward to sitting down with both McNesby and Krasner — likely separately — to work on new policies and procedures going forward.

Former Philadelphia Commissioner Richard Ross resigned in August, just a week after six officers were shot in an eight-hour standoff in Nicetown-Tioga. He resigned after being named in a lawsuit alleging a culture of sexual harassment in the department.

Deputy Commissioners Joe Sullivan and Dennis Wilson, as well as Coulter, were among the 30 candidates in the running for the job.

Outlaw pledged some of the changes she discussed on Monday would be incremental, others swift, but she asked Philadelphians for support and help in the process.

Outlaw will begin her tenure as commissioner on Feb. 10. She'll be the highest paid police commissioner with a salary of $285,000.