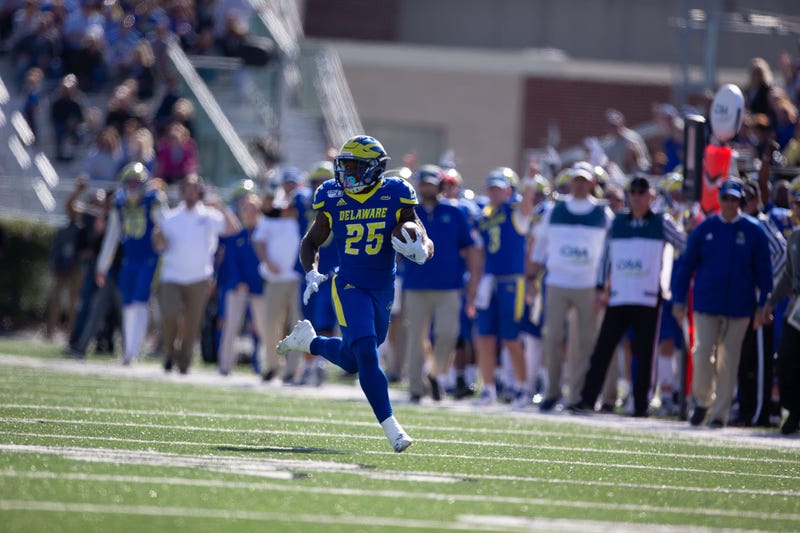 PHILADELPHIA (KYW Newsradio) — The University of Delaware football team will be home on Saturday for a Colonial Athletic Association battle with Richmond.

The Blue Hens (4-3, 2-1 CAA) are coming off an impressive victory last weekend as they slipped past New Hampshire in Newark, 16-10. It was impressive, not just because New Hampshire is a good football team, but also because the Blue Hens bounced back from getting their doors blown off the week before in a 42-7 loss at Elon.

"We showed a lot of resiliency, a lot of character, a lot of fight," Delaware head coach Danny Rocco told KYW Newsradio. "Played a really, really good football team in New Hampshire, and we played a very, very physical game. Our guys came to compete and really played really hard for the full 60 minutes. And played with a lot of confidence, which was exciting to see, having to bounce back from the disappointing experience the week before."

Redshirt senior Pat Kehoe quarterbacked the Blue Hens in the win over the Wildcats. (Redshirt sophomore) Nolan Henderson missed the game while in the concussion protocol. Rocco talked about the quarterback situation this week.

"It's probably going to be more similar than different," he said. "I definitely feel like Pat will be getting the majority of the work here this week. I do feel confident that Nolan's going to be available on Saturday. But the best formula right now for us would be a repeat kind of performance, in terms of being able to get our running backs to have good days, DeJoun Lee (23-103) and Will Knight (16-101) both had over 100 yards rushing (in the win over New Hampshire), and use that kind of formula, but yet be more efficient with some of the play action throws and maybe get a few more down the field throws in the passing game."

Richmond (3-4, 2-1 CAA) is coming off a tough 28-27 loss to Yale last weekend. The Spiders actually led 27-7 in the second half, but Yale put together an impressive comeback, which was capped by two touchdowns in the game's final 90 seconds. Of course, prior to coming to Delaware, prior to the 2017 season, Rocco was the head coach at Richmond.

"Their senior class are guys that I know well, and some of their redshirt juniors are guys that we know well," Rocco said. "But they've really flipped the roster. In a lot of ways, it's kind of like our roster this year. We have so many new names at so many new positions and new faces in the game. The more you study them, the more you say, 'This is a very, very talented team.'"

Saturday's game kicks off at 1 p.m.