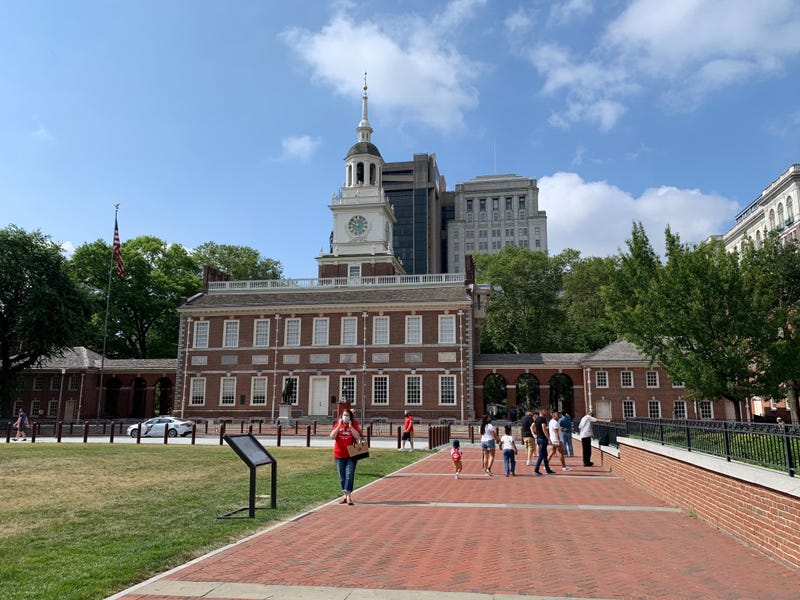 PHILADELPHIA (KYW Newsradio) — Things look much different this Fourth of July in Philadelphia amid the coronavirus pandemic. Lots of events have been canceled or moved online.

But people still flocked to the birthplace of America to check out the historic sites on Independence Mall.

Typically there's a big stage where the Philly Pops perform, and large crowds, large enough, according to a security guard, that some streets are shut down to traffic. Amid the pandemic, however, that's not the case.

But, while you couldn't get a free tour of Independence Hall this year, you could still snatch a few pictures of the historic building, and that's exactly what tourists did.

Baraq Stein and his boyfriend traveled from Washington, D.C. He said when they were deciding where to go they kept thinking about health officials and how they said outside is safer than being inside when it comes to coronavirus.

"We'll go to Philadelphia," he recounted deciding. "There's a bunch of historical stuff, a bunch of stuff outside so we're checking things out, thus the Liberty Bell."

Stein said while D.C. has a lot of history too, Philly is special.

Greg was in town from Georgia, visiting his wife Marilyn's daughter who lives in Philadelphia. The couple decided to drive due to coronavirus, and stopped in D.C. to see the Jefferson Memorial before coming to Philly.

"We wanted to come here and see where the Declaration of Independence was signed," said Marilyn.

"So we’re just having a great time, beautiful day today," said Greg. "We're about to go see the Liberty Bell next."

While Independence Hall was closed this year, virtual tours were available online.

And while the fireworks were canceled, that didn't stop hundreds on Independence Mall from looking to the skies for a U.S. military flyover show.

The spectacle lasted only a minute as the U.S. Air Force Thunderbirds flew in from the northeast part of the city and out towards the southwest.

Onlookers like James Hao said they missed the annual fireworks show, but it was great to have something to do with everything cancelled.

"The show was great," said Hao. "The B-2 bomber, you don't usually see it in the air show. It was wonderful."

Meredith Gross said with everything going on, it was great for Philly to come together for a moment of positivity.

"It was so quick and I kind of thought they were going to fly directly up the mall, so I feel like we got them for three seconds," she said. "It's something cool for us here when we have nothing this year."

8-year-old Jack was impressed. "I think the airplanes were very cool, but my favorite was the one with the triangles on it," he said.

Still, he admitted it wasn't the same.

"I mean, I'd rather be seeing fireworks."