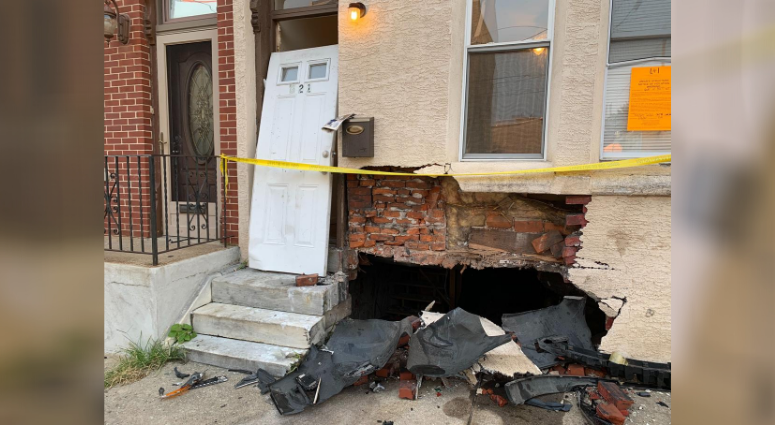 PHILADELPHIA (KYW Newsradio) — Two women are dead and a teenage girl is injured after an out-of-control car flew off the road and hit them in the Mantua section of Philadelphia Wednesday night.

Around 9:30 p.m., at 35th and Mount Vernon streets — less than a mile south from the Philadelphia Zoo — police say the driver of a Ford Taurus jumped the curb, drove about 40 feet onto the sidewalk, and hit three people, who were walking back from a store after getting sodas.

One of the victims was launched across 35th Street and into a vacant house.

“She hit that front door with such force, it knocked the door — which is an aluminum and wood door — knocked it off its hinges,” said Chief Inspector Scott Small. “(Police) actually found this 30-year-old victim in the living room.”

The woman, identified as Nicole Fundenberg, died at Penn Presbyterian Hospital, as did 58-year-old Zenobia Murray. Police say the third victim, a 14-year-old girl, suffered leg injuries but is expected to survive.

Every so often Thursday morning, loud sobs reverberate throughout the neighborhood, as family and friends embrace and cry near the scene.

Police say the driver, a 19-year-old woman, was taken to the hospital but did not suffer serious injuries. Police say the crash was caught on crime cameras.

“Accident investigators are gonna determine her blood-alcohol level to see if any alcohol or narcotics were involved,” Small said. “At this time, we don’t know.”

The driver’s car also slammed into a parked car and the same house that Fundenberg was thrown into, leaving a gaping hole to the right side of the front door.

Philadelphia Department of Licenses and Inspections declared the house unsafe.