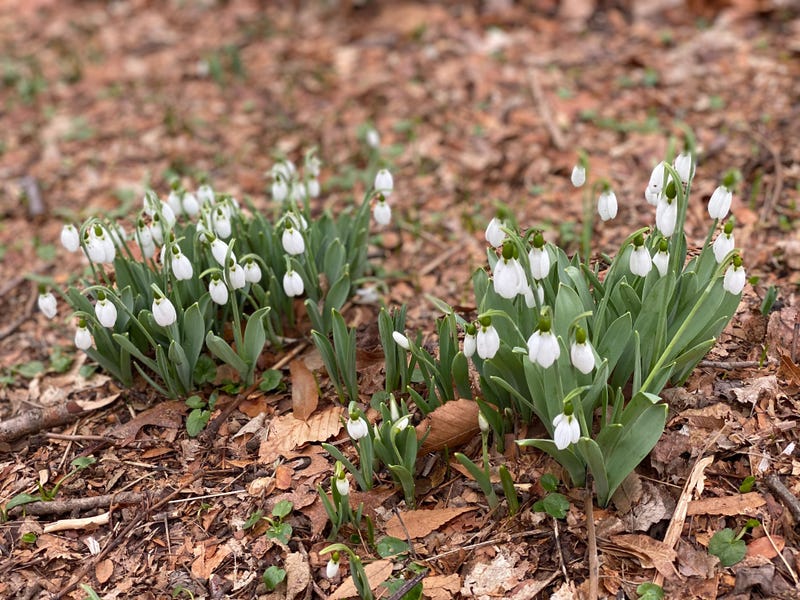 To paraphrase Bob Dylan, you don’t have to be a whistlepig to know which way the wind blows.

Snowdrops are among the earliest-blooming spring bulbs whose nodding white flowers normally appear in mid to late February. Not this year.

“We’re seeing some snowdrops coming up, some of the winter aconites — the small, little, yellow bulbs that come up very early — and some of our witch-hazels are flowering earlier than I might expect them to be,” he said. “It seems like a good two weeks or so, maybe a little bit more; it’s hard to say. It’s just been so mild that they’re just ready to go.”

In northern Delaware, Winterthur Garden curator Carol Long said the aconite, snowdrops and even some crocuses are putting on a show.

“The volume that we have up now is different from anything I've ever seen, and I've worked here for 28 years,” she noted.

Although the warm trend is forecast to continue this week, we’ve had some frigid Februaries. But Long said the early spring bulbs can take it.

“A lot of these are grown in mountains, where you’re going to have all these different temperatures and fluctuations, so they are used to that kind of weather,” she said.

Sara Dewees and her husband, Kyle, who live in Avondale, own Whiskey Hollow in Bradford County, where they produce Pennsylvania maple syrup.

“Usually we’re tapping around mid to late February, and it runs through maybe the beginning of April,” said Sara Dewees.

But because of the warmth, the sap is already running, so they started tapping the trees last Thursday.

“It’s the first time we’ve tapped in January,” she added.

With the effects of climate change becoming more apparent, it’s hard not to see these increasingly unseasonable signs of spring as more ominous than cheery.