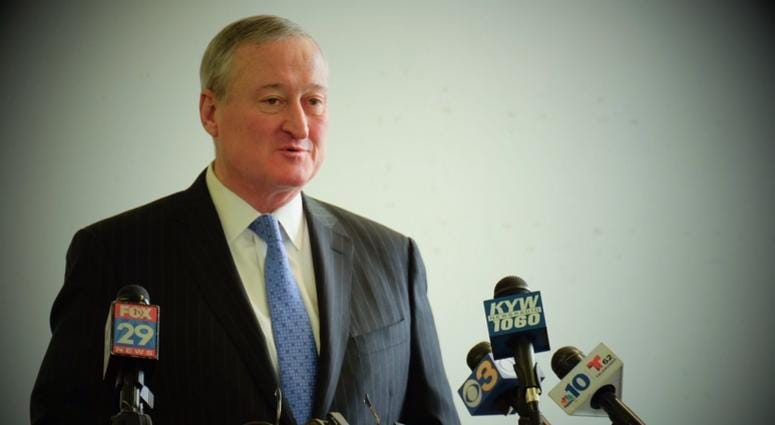 .@PhillyMayor Jim Kenney went to the podium as the democratic nominee only 90-minutes after the polls closed. He thanked supporters for backing a cause "to build a fair and equitable city, where everyone has a chance to succeed." pic.twitter.com/bNaGIeVP5t

In his victory speech, Kenney thanked his supporters and highlighted some successes his administration has achieved in the last four years.

"I want to thank all of the volunteers, supporters and voters who helped me win our party’s nomination tonight. Our success tonight wouldn’t have been possible without the many individuals who took action to support our cause. Our cause to provide quality for all children. Our cause to rebuild our schools and parks and recreation centers. Our cause to build a fair and equitable city where everyone has an opportunity to succeed," Kenney said.

He then thanked his two challengers.

"I’d like to recognize and thank the two challengers, Sen. Williams and Alan Butkovitz. I want to commend every candidate across the city who was on the ballot today. It takes a lot of courage to run. It’s good for local democracy that so many dedicated candidates threw their hats into the ring during this primary. Win or lose, I hope we will all work together moving forward to build a stronger and more equitable Philadelphia," the mayor said.

Kenney said there is work that still needs to be done, specifically mentioning the city's homicide rates and the opioid crisis as issues to be tackled.

"Before all of our triumphs, we still have much more work to do. Our homicide rate is moving in the wrong direction. The opioid crisis is wreaking havoc on so many families in many of our neighborhoods. Now, I’m ready to keep confronting these challenges and make sure that the next chapter in Philadelphia history is a positive one," he said.

At Butkovitz's camp, it was a low-key watch party with about 12 members of the campaign inside a Center City conference room.

He congratulated Kenney, wishing him well in his second term. But he said he "thought it was important to give people a choice in this election."

"Although Philadelphia has a lot going for it, there are some very, very serious problems that have not been sufficiently high on the radar screen for government action and for the attention of the public. Chief among that is the homicide crisis and the failure to have a substantive proactive plan on that, and right next to that is the poverty crisis and the lack of an aggressive plan to create jobs," Butkovitz said.

#BREAKING: Sen. Anthony Williams concedes Democratic mayor's race, saying the race was not about him personally, it was about crime, poverty and education. pic.twitter.com/QxDZ0Y0Fu7

At his headquarters at 19th and Girard streets, Williams conceded, saying the race wasn't about him but issues the city faces and despite his loss in the mayor's race, he'll continue to fight to address the problems plaguing Philadelphia.

He told supporters that his grassroots campaign without money for TV advertising was meant to try to solve the problems people care about.

"This race really was not about me personally. This race was about issues that we raised collectively. And without, frankly, any resources, frankly without the benefit of power and structure, without the party and a lot of other things that normally come along with a person like me, in spite of that, we garnered the interest of people across the City of Philadelphia," he said.

The 62-year-old says he'll continue to serve in the state Senate, and continue to be a voice for those without power or privilege.

The Democratic Party ticket prevailed in the hotly-contested race for Philadelphia City Council at-large, but there were some upsets in the primary.

Ron Donatucci has been Register of Wills for nearly 40 years but his tenure is coming to an end to Tracey Gordon, who is running her fourth race for public office. Gordon has won the Democratic nomination, all but assuring her the office.

But the biggest upset of the night was in the 3rd District where political newcomer Jamie Gauthier unseated seven-term Councilwoman Jannie Blackwell. In the 7th District, Maria Quinones-Sanchez held off a challenge from state Sen. Angel Cruz.