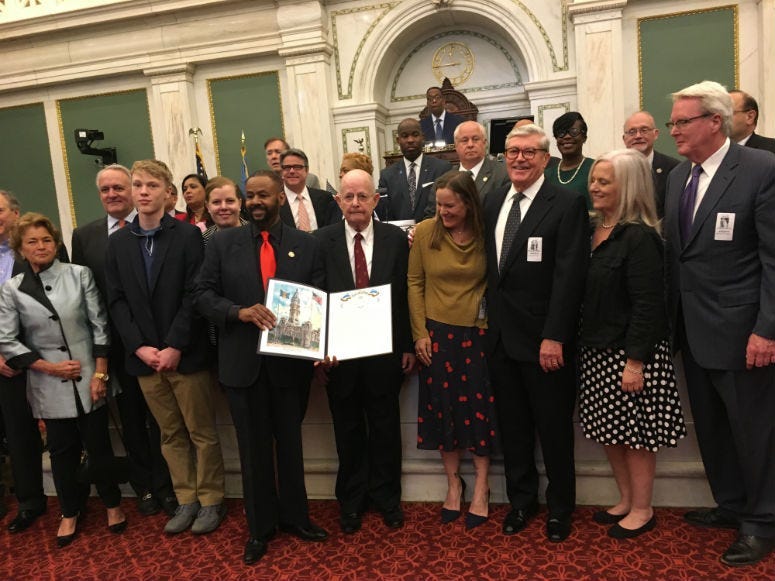 PHILADELPHIA (KYW Newsradio) -- Philadelphia City Council has marked the retirement of a man who was a major behind-the-scenes force in city politics for five decades.

Fred Voigt served many different roles and ended his career as the attorney for the City Commissioners.

Councilman Curtis Jones sponsored the resolution honoring Voigt, who became one of the most influential voices in the city in 1977 when he became head of the Committee of 70.

"Let me take you back in time," Jones said. "In those times, there was turmoil: enemies, frienemies colliding over political ideology but there was one man who stood above the fray, who had the integrity (to be trusted by) all parties and factions."

During his 30 years in that job, Voigt watchdogged elections so voters could feel secure in the results and settled disputes when they didn't. He was equal part advisor and critic to five mayors. Reporters used to call him the city editor because of the stories he pointed them to. And he threw a party every year that attracted the most prominent politicians.

Green was a life-long friend who says Fred lived Oliver Wendell Holmes' call to the passion and action of his time.

"Fred understood that and lived it all his life," Green said.

Voigt went to the Office of City Commissioners ten years ago, where, he joked, elections aren't held, they're litigated.

"People don't win elections in Philadelphia," he joked, "they're all stolen, just ask the losers."

Voigt cited the people, like Jones, that he'd taken under his wing when they were young who went on to great careers.

"All of that taken together has given me great pleasure," Voigt said.