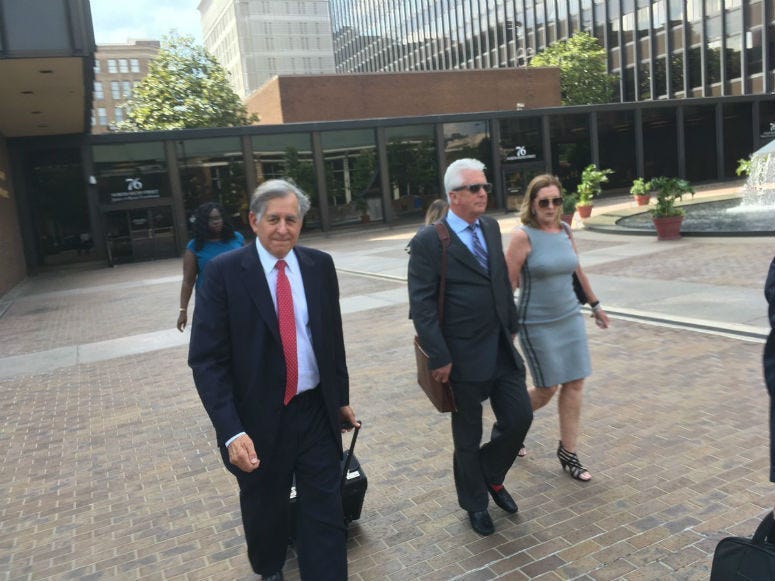 PHILADELPHIA (KYW Newsradio) — The owner of an electrical contracting company, who admitted to his tax fraud role in a case that now includes indicted labor leader John Dougherty and seven others, has been sentenced. He is the first defendant in the federal authorities' case against "Johnny Doc."

George Peltz of the Berlin, New Jersey based MJK Electric, apologized to friends and family, as well as federal authorities, saying "how sorry I am for this lapse of judgment."

Assistant U.S. Attorney Paul Gray says Peltz "cheated the IRS and his own workers with impunity." While Peltz faced a maximum prison sentence of five years, the guidelines called for 24 to 30 months, and prosecutors sought 30 months.

At the tax fraud sentencing of the first defendant in the feds' case against Local 98 Union leader John Dougherty, electrical contractor George Peltz apologized to family, friends and the feds: "how sorry I am for this lapse in judgement." pic.twitter.com/FjwTQvpITV

Defense lawyer Barry Gross noted they had to move the sentencing to a larger courtroom because of all of those willing to speak up for and support Peltz.

"We sought a downward variance because the person he is. We felt that what he was convicted of didn't show what type of person he is. It was clear that he accepted responsibility for what he was involved in," Gross said.

"That means this is it. He's not cooperating. He's not testifying," Gross said.

During the hearing, the defense table opened an envelope with four checks totaling more than $958,000 in restitution that Peltz has agreed to pay to the IRS and the union benefit fund.

Judge Jeffrey Schmehl then said while "this was a systematic and deliberate stealing of money, not a lapse in judgment," he did note all of the good deeds Peltz did for family and friends and he granted the downward variance, sentencing Peltz to 18 months in prison.

Peltz previously pleaded guilty to charges that include tax evasion and making unlawful payments for the benefit of Local 98's John Dougherty, with whom he has had a long association.

The latest Local 98 investigation began one summer morning in 2016, when FBI and IRS agents descended on Dougherty's union office and South Philadelphia home, as well as the offices of City Councilman Bobby Henon and others.

The sweeping 116 count public corruption indictment unsealed in late January against Dougherty and seven others charges them with running a six-year scheme to allegedly steal more than $600,000 from the IBEW union and covering up misspent funds by falsifying documents.

The charges include conspiracy, bribery and fraud, and prosecutors say if convicted, the defendants could face decades in prison.

Dougherty, Henon and the others have pleaded not guilty.