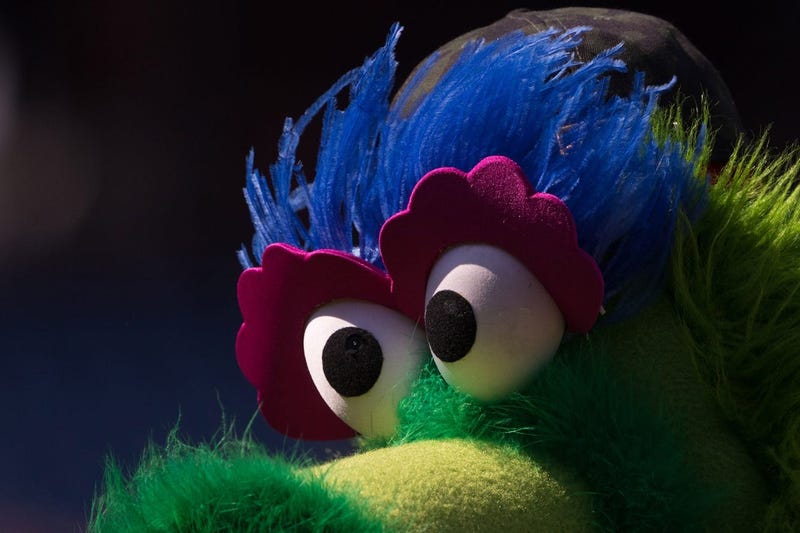 PHILADELPHIA (KYW Newsradio) — The Philadelphia Phillies' mascot, the Phanatic, has a new look, amid a legal fight with the long-running mascot's original designers.
A few adjustments to the Phillie Phanatic's costume were unveiled at the team's Grapefruit League home opener in Clearwater, and fans already have opinions.

He has evolved, but clearly hasn't matured. pic.twitter.com/Tmo5jHNQOB

Summer Smith of Philadelphia said she didn't think fans were ready for changes to the city's signature mascot.

"If it's something that's already made its brand for itself, that's like its label," she said. "Foot Locker isn't going to take away its stripes. I feel like that's what the Phillies just did."

The changes include flightless feathers rather than fur-colored arms, stars outlining the eyes, blue socks with red shoes, a larger posterior and a powder blue tail.

And the famous Phanatic snout was shortened. That's the change that is hitting fans the hardest.

According to Phillies fan Eric Klothen, "If it ain't broke, don't fix it" applies.

"Why did they mess with his snout?" Klothen wondered. "I don't understand. Did they make him skinny?"

Eric Ammon agreed, but said it was about keeping up with the times.

"Snout length is awkward," he critiqued. "It's like a can of soup. I'm not vibing with it. Everything else I'm cool with. He's a little fluffier, colorful and for the kids, for the times."

Ruth Mandelbaum was more open to the changes, but cautioned the team not to alter the Phanatic's behavior. "As long as they don't change his personality and keep him as the best mascot in baseball, then I'm happy with it."