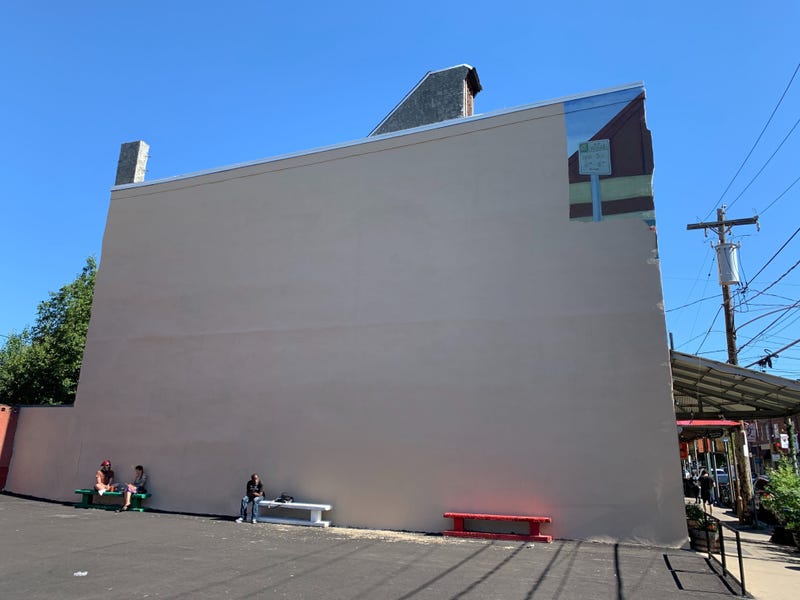 PHILADELPHIA (KYW Newsradio) — Beige paint now covers the wall that served as a canvas for the mural of former Philadelphia police chief and Mayor Frank Rizzo.

Once a week, Melinda King makes a trek from Northeast Philadelphia to the Italian market in South Philadelphia to get groceries. To her, the now painted over mural in the 9th Street Shopping District is a welcome sight.

"I'm not upset that he's not there," she said. "I understand the necessity of history being there, and he meant something to a community, but I feel as if it's time for it not to be there."

King said Rizzo is often remembered for being racially motivated during his tenure as mayor in the 1970s. She added that the area is now more diverse and accepting, and the art that's displayed there should reflect that.

"People are a little more open-minded, and realize that everything going on is for a purpose, and I think it's in the right direction," she said.

Jessica lives just a few blocks away from the mural, and said the beige paint job is an upgrade.

"To be frank, we're very excited this has been taken down," she expressed. "I feel if anything, it's torn the city apart more than it needs to."

Jesse Padilla said in order for the city to properly heal, it needs to move away from images that are hurtful to so many people.

"I'm hopeful that what does come from it, is that it brings a community together," he said.

However, former Councilman Frank Rizzo Jr. said he believes the removal of his father's presence reflects a total lack of class on the part of Mayor Jim Kenney.

"Jim Kenney and my father never got along," he said. "I think this is the mayor flexing his authority."

Rizzo said the controversy surrounding his father couldn't be further from the truth.

"He didn't do anything that some people are suggesting he did. I don't believe he was a racist," he protested, calling the removal of his father's mural unnecessary.

Site owners and developers said they will work together to put a new mural in Rizzo's place.