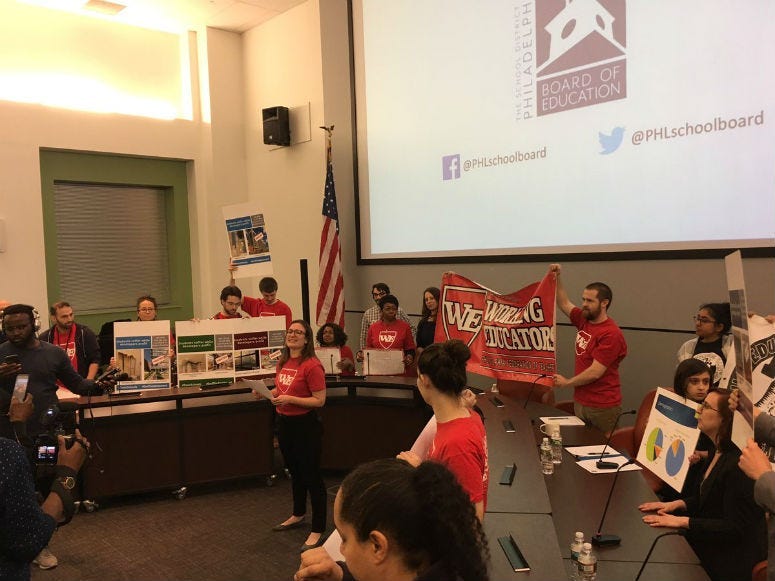 When members of the Philadelphia Student Union loudly interrupted the school board's meeting last Thursday, the board tried to carry on.

But the board recessed the meeting and the nine members left the auditorium, retreating to a committee room where they voted in private, televising the proceedings online and on the district's cable channel.

Retired teacher Lisa Haver, a co-founder of the Alliance for Public Schools, is calling on the board to reconvene and vote again in public.

"Just livestreaming a meeting does not make it a public meeting, because the public cannot be in the room when you vote. The public can't be heard on what you're voting on," Haver said.

Among the items the board approved was a preliminary version of its budget.

"I know that the board thinks they voted on that but they did not vote on it. It has to be at a public meeting and we did communicate that to the board," she added.

"They have to just put out a notice that says we are meeting on this day at this time, and give the public an opportunity to speak and take all those votes in public. It's really not a hard thing for them to rectify," she said.

In a statement Wednesday, the board's general counsel Lynn Rauch said "The Board is in compliance with the Sunshine Act."

Board chair Joyce Wilkerson said after the meeting she believed the board was "legally entitled to conclude the meeting."

Haver says her group is consulting its attorney.