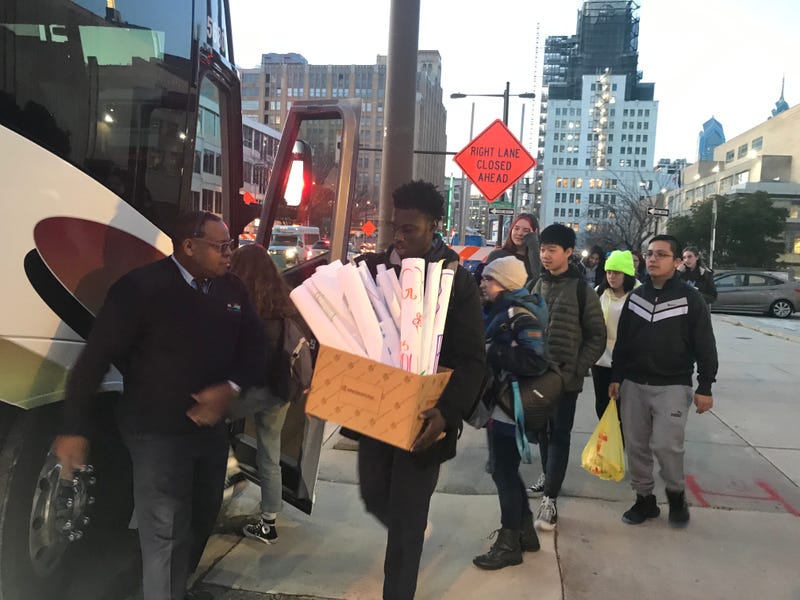 PHILADELPHIA (KYW Newsradio) — Students, parents, teachers and advocates are rallying in Harrisburg to end Philadelphia's toxic schools. This is happening as yet another school in the city had to close because of asbestos.

Franklin Learning Center in Spring Garden is now the fourth school to close this academic year because of asbestos. The hope there is to reopen after winter break. But hearing about yet another asbestos-plagued building was extra motivation for this group heading to the state Capitol.

"My brother's school, the school that I recently went to for nine years, had asbestos," said 15-year-old Flora Hernandez Mekonnen, referring to Meredith Elementary. "And next thing you know, I come to a high school with asbestos, too."

She's talking about Science Leadership Academy. Her education path has been paved with asbestos.

Hernandez Mekonnen's mom Robin says lawmakers in Harrisburg need to get the district the funding it needs now and in the future.

"I really hope they act and they know this is a pressing and imperative issue for the children to have safe educational environments," she said. "For the parents to feel safe about their children being educated and not looking down the road — 20, 30 years, at major health problems."

Before departing School District of Philadelphia headquarters by bus on Wednesday morning, parents were getting fired up.

"I think it's apalling, so I'm on my way, bad knees and all!" said Sheila E. Johnson from Ogontz. Her daughter attends Wagner Middle School.

"Enough is enough. We're tired, and you need to do something about it!" said Ernie Bristow from Logan. Her three children graduated from city schools.

That "something" that they want to see from state lawmakers is more funding now to deal with asbestos — and sustained funding in the years to come.

"It's not new to people in schools that our facilities are crumbling," said Daniel Symonds, a teacher at Science Leadership Academy, one of the schools affected by asbestos. "The fact that we're finally getting news about it is an important next step towards getting the funding that we have deserved for many, many years."

With Symonds were many of his students. He says they're getting quite a learning experience.

"It's a field trip, but this is a good example of school as real life. The students, like any adult, are gonna see who's with us and who's against us."