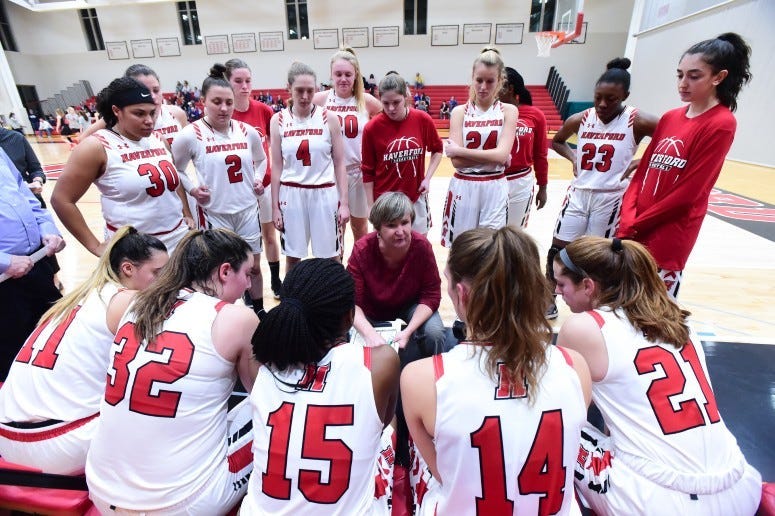 PHILADELPHIA (KYW Newsradio) — The Haverford College women's basketball team has so far put together one of the most impressive seasons in the region.

The Division III Fords are 20-3 on the season and they sit atop the Centennial Conference with a 17-1 league mark. Haverford will bring a 10-game winning streak into their Wednesday night home game against Swarthmore.

Bobbi Morgan is in her 12th season as the head coach at Haverford and she talked about how this season has come together.

"We lost our starting point guard and our starting two-guard, so we definitely had some big holes to fill," she said. "But we also had the majority of our team back that had done so well."

The team had won the Centennial last season, and the starting two-guard was also a 1,000 point scorer.

"I think what I needed to do was figure out who's going to step up and do the scoring and how we would be at the point guard position. Nyla Robinson has filled in beautifully at the point and two of our players, Anna-Sophia Capizzi, a senior, and junior Julianna Clark, have led us in scoring," she added.

Capizzi's numbers have been especially impressive this season.

She's leading the Centennial Conference in scoring at 19.7 points per game, and doing so by shooting 49% from the field and 42% from three.

"If she had come to our team at a different point, she probably would've been putting those kinds of numbers up earlier," Morgan said. "But we were so balanced. She's a three-point threat, she can drive to the basket. She gets points in little ways, like offensive rebounds and just has a way of finding the ball. So she can really score inside and outside, off the dribble. She's very, very talented."

Haverford's defense is top notch. The Fords are holding opponents to 46.3 points per game on 31% shooting from the field.

"It's always been the hallmark of what we try to do," Morgan said. "We have games where we give up too many points or more points than we like but I think that's the one thing that everyone on our team has bought into and we take a lot of pride in that. And we're athletic, we've got some big, athletic kids and some quick guards, so we're able to usually control the tempo and hold people down."

Haverford's Wednesday night game against Swarthmore will get underway at 6:00 p.m.