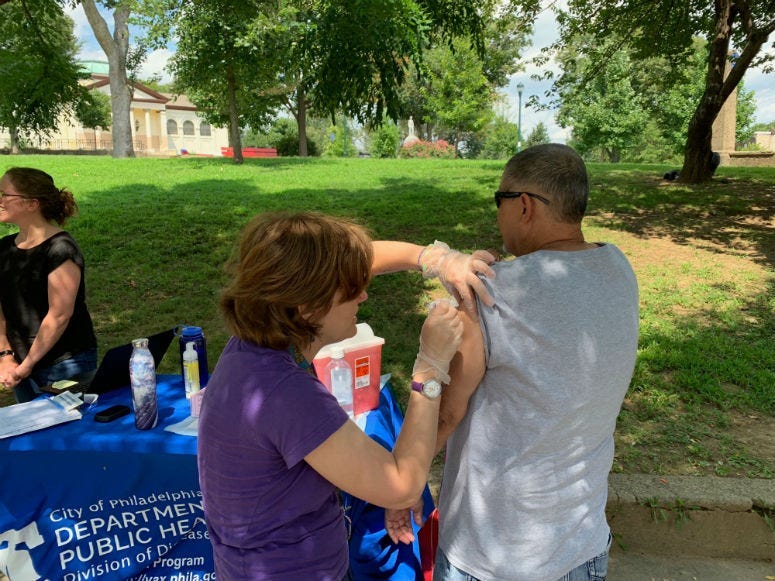 PHILADELPHIA (KYW Newsradio) — The Philadelphia Department of Public Health is dealing with a case of hepatitis A in Kensington, and the agency is offering free vaccines this week.

People and some beat cops lined up to get their shots at a table the health department set up at the edge of McPherson Park Tuesday. Some said they were reluctant.

"I don't like needles. They hurt too much. Especially when they touch your bone," said one person waiting in line.

The health department decided to take action after learning that a worker at Imperial Kitchen on Frankford Avenue recently developed a case of acute hepatitis A.

The department is recommending that anyone who bought food from there between July 21 and Aug. 6 get their shots as soon as they can, although it's more as a precautionary measure in that the risk of infection is said to be very low.

Still, a lot of people aren't taking any chances.

Tony Bousono said his friend just came down with hepatitis A.

"She was in the hospital for a couple of days and she told me about it, that they're doing the vaccination here. So I came down to protect myself," Bousono said.

Hepatitis A infects the liver and can spread through unwashed hands that prepare food.

Symptoms can range from diarrhea to vomiting and jaundice.

The health department crew will return to the park on Thursday morning for another round of shots.