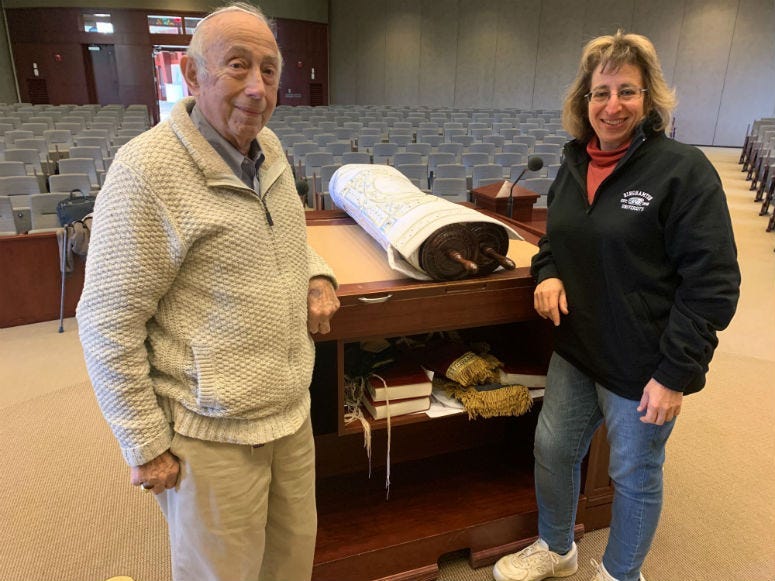 VOORHEES, N.J. (KYW Newsradio) — In 1939, Fred Behrend became a bar mitzvah while he and his family were refugees in Cuba. His family fled Nazi Germany a few months prior.

"We were too poor to entertain,"he recalled of his coming-of-age ceremony, "so whoever wanted to come had to bring their own food with them."

But exactly 80 years later, he’s returning to the pulpit at his Voorhees synagogue to recite a special prayer — all coinciding with the 81st anniversary of Kristallnacht.

"It was somebody’s bright idea that after 80 years, I should have another bar mitzvah," joked Behrend. After all, it was his daughter, Evelyn, who came up with the idea.

Congregation Beth El will recognize the 93-year-old Holocaust survivor. He’ll be honored during 13-year-old Eli Grey’s bar mitzvah ceremony, where the teen will use a yad — a special pointer used to read the Torah — that Fred Behrend’s father found in the aftermath of Kristallnacht.

"My father found that in the ashes of our burned-out synagogue," he said. His family smuggled it out of the country.

Kristallnacht, also known as the Night of Broken Glass, was a night of violent, anti-Semitic riots, in which hundreds of synagogues and Jewish businesses were desecrated and burned to the ground in Germany.

Fred Behrend wrote a memoir about that night and his life — at age 90. “Rebuilt from Broken Glass: A German Jewish Life Remade in America” was written with the help of Larry Hanover, who is also a bar mitzvah tutor and Temple University adjunct professor.

After writing the book, a documentary is in the works about his life. His family is fundraising for it.

The coming-of-age ceremony in Jewish tradition takes place at age 13 for boys, sometimes 12 for girls. But not all pre-teens are so lucky to be surrounded by such meaningful examples of living history.

Eli will also read from a Torah that was restored earlier this year through the bat mitzvah project of another young congregant, Campbell Schwarz. The Torah was rescued from a synagogue that was burned down by Nazis.

These days, Fred Behrend attends Shabbat services regularly at Beth El, and he always makes sure to recite the mourner’s kaddish, a prayer said to mark the anniversary of the death of a loved one.

"People always ask me, who are you saying kaddish for?" he said. "I say, 'It’s not for my family. It’s for the 6 million Jews who have no one to say Kaddish for them.'"